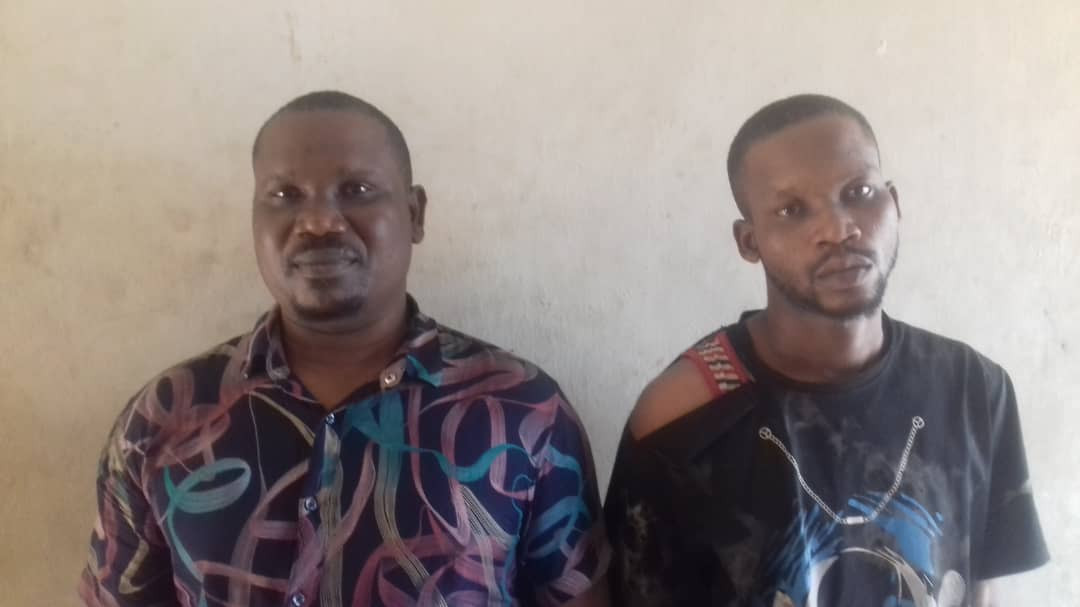 The suspected kidnappers
Two suspected kidnappers have been arrested by men of the Ogun State police command.
The duo were accused of terrorizing Ijebu-Ode and its environ.
The suspects, Samuel Oke Abiodun ‘m’ 46yrs and Denis Blessing ‘m’ 28yrs were arrested following a series of Kidnap cases in Ijebu-Ode, consequent upon which the commissioner of police, CP Lanre Bankole, gave a marching order to all the DPOs in Ijebu-Ode to fish out the perpetrators of the dastardly act within the shortest possible time.
Confirming their arrest, the spokesperson of the state police command, DSP Abimbola Oyeyemi, said the DPO Igbeba division Csp Musiliu Doga and his crack detectives embarked on a technical and intelligence-based investigation which subsequently led to the arrest of Denis Blessing on the 8th of December 2021 in his house at Ijebu-Ode.
His arrest and confession led to the apprehension of Samuel Oke Abiodun in his hideout also at Ijebu-ode
''On interrogation, the two suspects confessed to having participated in four different kidnap operations in Ijebu-Ode. They confessed to being part of a syndicate that kidnapped one Alhaja Salam Mojisola on the 6th of December 2021 at the entrance of her house situated at Akinsanya Street Mobalufon Ijebu-Ode.
They also confessed to the kidnapping of one Mrs Olaitan Daodu on the 26th of January 2021. Also, one Mrs Abimbola Bolanle Lateefat, the Deputy Director I.C.T department at Tai Solarin University of Education was also kidnapped by the gang on the 20th of May 2021. They also participated in kidnapping one Mrs Adegoke along Atan-Ijebu road.
According to the duo, their own assignment is to scout around, identify and monitor their would-be victim from their business places to their houses, and inform other members of the gang who will then block the victim mostly at the entrance of their houses and abduct such person.'' Oyeyemi said
The Toyota Camry with registration number GGE 200 FN which is their operational vehicle has also been recovered.
Meanwhile, the Commissioner of Police, CP Lanre Bankole who commended the resilience of his men in smashing the syndicate has ordered the transfer of the suspects to the anti-kidnapping unit of the State criminal investigation and intelligence department for discreet investigation. The CP also directed a massive manhunt for remaining members of the syndicate with the view to bring them to justice. He also assured the good people of Ogun State of police readiness to fish out any criminal hibernating within the State.
By makarella - December 21, 2021