Nigerian-born Rugby Player, Daniel Igbinedion Jailed In The UK For Subjecting His Ex-girlfriend To Horrific Abuse

The former West Yorkshire rugby league player was sentenced to three years and three months in jail on Tuesday, December 21. 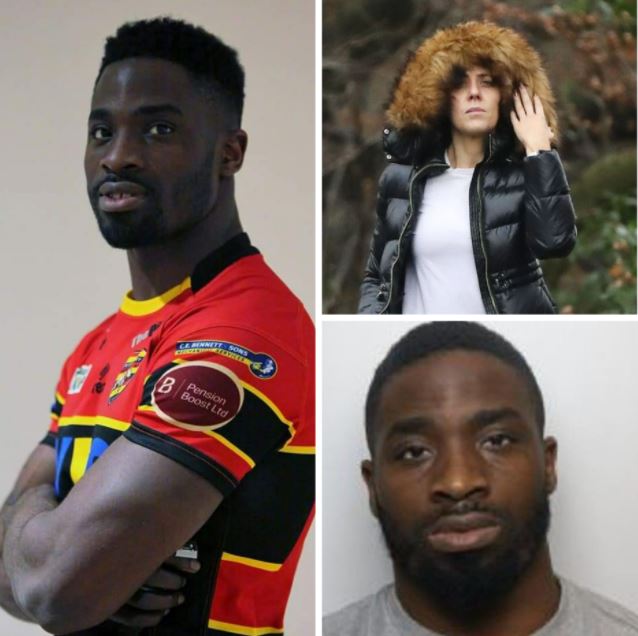 Daniel Igbinedion, a Nigerian-born professional rugby player, has been handed a jail sentence in the UK for subjecting his former girlfriend to abuse and threatening to end her life.

Igbinedion, 26, was convicted of controlling and coercive behaviour and three charges of assault in October.

The former West Yorkshire rugby league player was sentenced to three years and three months in jail on Tuesday, December 21.

The court also heard that Igbinedion dragged the insurance broker out of a club and tore off her SmartWatch so she couldn't dial 999 before threatening her with a blade.

Lyles who was in a relationship with prop forward for 18 months, spoke out about her horrific ordeal.

Speaking after sentencing, she said when she met the the former Castleford Tigers, Featherstone Rovers and Dewsbury Rams player she believed he was a "decent guy" but  quickly became "possessive and jealous"

The powerfully-built Igbinedion had first met Katy when he became her personal trainer at her local gym.

"About six months into our relationship he became physically violent, and showed me that he had a very evil side to him," she said.

"He made threats which made me scared of what he would do to me and my family. He held me prisoner and followed me everywhere. He proposed to me and even promised that he would never harm me again – if I accepted a promise ring from him. I rejected his proposal and then, months later, he tried to kill me."

Judge Andrew Hatton said that Igbinedion had accused Katy of being disrespectful to him and it was clear that he felt himself, as a professional or semi-professional sportsman, to be somewhat different to everybody else.

Judge Hatton said that Katy was in a sense under Igbinedion’s spell and the relationship continued, despite her seeing a deeply unpleasant side of him.

On one occasion, she had dressed up for a Christmas party in Liverpool and Igbinedion had called her a "slag" so she had spent the rest of the night wearing a coat over her outfit.

"Others tried to persuade her to remove her coat but she kept it on because she was under your control,” said the judge.

On the same night, Igbinedion threw her over his shoulder and carried her out of a bar before dragging her through the streets by her arm in an undignified fashion, until a concerned doorman intervened.

Igbinedion spent a night in a police cell over that incident but was not prosecuted and the relationship resumed.

The court heard how, on other occasions, Igbinedion drove erratically and aggressively pursuing his victim’s car and his abusive behaviour even led to her threatening to kill herself.

Judge Hatton said Igbinedion had drained all of the life and resistance out of her and he had driven her to that state of mind.

After a night out in Leeds jealous Igbinedion attacked her again at his then home in Bingley, where he “kept her prisoner” and strangled her with both hands around her neck.

She was unable to breath and feared that he would kill her.

In a victim impact statement she described how she now suffered flashbacks, anxiety and sleepless nights.

Speaking out about the abuse that she suffered, Katy said: "I came forward in the hope that I would potentially save the life of a future victim.

"I would encourage anyone who is suffering from domestic abuse to keep notes, take photos and speak to a friend or a family member.

"Please take the first step and report your abuser to the police – your safety will be their priority. Get out of there, but do it safely. There are lots of confidential helplines and groups who can support you.

"I’d like to thank West Yorkshire Police for their help and support in ending this nightmare journey and finally getting some justice for what I had to suffer.''

The court heard that Igbinedion had suffered from mental health issues and had been sectioned at one stage, but in a letter to Judge Hatton he said that he had now undertaken an anger management course while remanded in custody.

In his letter, Igbinedion said that he was genuinely sorry and his barrister, Chloe Birch, said that he now faced the end of his professional sporting career.

"That, to somebody of Mr Igbinedion’s talent and potential, will be a significant punishment,” she said.

Jailing Igbinedion for three years and three months, Judge Hatton said: "I have to deal with you for this sustained course of conduct including gross offences of violence against a background of controlling and coercive behaviour.

"This whole catalogue of offending was so serious that only a custodial sentence can be justified for it.''

He said that Katy had given her evidence at the trial with dignity and in a compelling and impressive way.

Judge Hatton also made Igbinedion subject to a five-year restraining order which bans him from contacting the complainant directly or indirectly.