The governor disclosed this at the state’s 2021 Christmas Carol of Nine Lessons, held at the Remembrance Arcade, Government House, Agodi, Ibadan, the state capital. 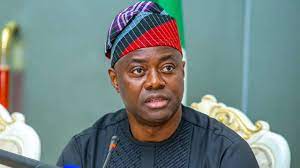 Oyo Governor, Seyi Makinde
Oyo workers will get 13th month salary, the governor of the state, Seyi Makinde has announced.
Makinde said he has given approval for the payment of 13th month salary to workers in the state.
The governor disclosed this at the state’s 2021 Christmas Carol of Nine Lessons, held at the Remembrance Arcade, Government House, Agodi, Ibadan, the state capital.
He said that his administration will continue to improve on governance in the state, adding that the people should expect more dividends of democracy in 2022.
A statement by the chief press secretary to the governor, Mr. Taiwo Adisa, sent to LEADERSHIP on Monday, quoted Governor Makinde as saying that civil servants in the state will receive the 13th-month bonus on December 27, 2021.
The governor, who also used the avenue to reiterate his administration’s resolve to take the hard decisions in the overall interest of Oyo State, said no matter the amount of criticisms, the government will not relent in developing the state.
“I want to give a glimpse of what we are trying to do. Some have criticised me on the Independent Power Plant project but I will still reiterate that Oyo State will have its own power plant. And from that we will expand it to industries and households as we move along.
“I want to thank you all for the support you have given us so far. I also want to appreciate our market women. Last week, I heard complains that people did not come to the market to patronise you.
“Anyway, last Friday, we paid December salaries so that people can come to buy things from you.
“But if you think you don’t want to spend it because of the fear of where to get another money, don’t worry, you will receive your 13th-month bonus on the 27th, which you can use for the New Year celebration,” Makinde said.
By makarella - December 21, 2021