Gunmen on Monday morning attacked the headquarters of the state police command in Umuahia, the capital of Abia State. 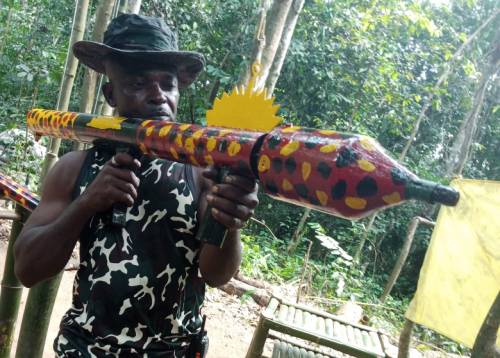 Biafran National Guard (BNG) has said it is responsible for the attack at the Abia State Police Command Headquarters, Umuahia, according to a report by Sahara Reporters.
BNG is one of the groups agitating for the secession of the South-East from Nigeria.
Recall that gunmen on Monday morning attacked the headquarters of the state police command in Umuahia, the capital of Abia State.
SaharaReporters gathered that during the attack, one person suspected to be a police inspector was killed.
A source who lives close to the station told SaharaReporters that he heard gunshots around 1 am.
"Around 1 am, we could hear gunshots. Initially, we thought the policemen at the station were the ones shooting because sometimes they shoot to scare potential assailants.
"By daybreak, we heard it was an attack and that a policeman was killed," the source said.
The BNG, in a statement issued on Tuesday, explained that it attacked the headquarters to effect the arrest of the Commissioner of Police, Janet Agbede to explain the reasons behind attacks on Biafrans.
The group added that it harboured no intention to bring down anyone at the station.
The BNG in the statement signed by its Head of Media, Elemamba Eberechukwu, further reiterated that it had declared war on the Nigerian government and announced October 30, 2021, as the independence day of the region.
The statement reads, “We the Biafran National Guard wish you merry Christmas and want to also use this opportunity to urge you to continue to be unbiased in your reports. As you all already know; we redeclared the sovereign state of Biafra on 30th of October 2021, by virtue of that re-declaration, Biafra became a sovereign state and we the Biafran army would like to maintain cordial relationship with you all.
“Our army will soon officially start exercising our full right as an independent state and wish to continue to enjoy professional relationships with you all as referees and also the eyes of the world. Biafra is a legitimate course and there is no way to freedom; every way leads to freedom, depending on what the oppressors threw at us.
“The occupational government of Muhammadu Buhari threw death at us, force and oppression. We are dying every day and our people experiencing all kinds of suffering. It is our inalienable right to choose to die no more. It is our right to defend our lives and we have fully triggered it.
”Remember we called for the release of prisoners of conscience being dehumanized for preaching Biafra but they refused. They chose this path because they settled like the alpha and omega that decide our fate. They did not release them and they have given us the impression they will never release them.
“These people killing us must be brought to book and that is what we are doing. They must face justice and that prompted the invasion of Abia state police headquarters to arrest the commissioner of police of occupational government of Nigeria who has overseen deaths of thousands of Biafrans there.
”We have no intention to burn down the police headquarter or seize it for the time being. Our plan was to get the commissioner; so he could explain why killing Biafrans became a thing of pride and joy to him.
“We are disappointed that policemen that ought to run away engaged us, despite seeing we were heavily armed. We lost no soldier neither did any of our soldiers sustained injury. We took control of the headquarter briefly and neutralized many of the state-sponsored terrorists firing at us. The commissioner escaped but justice is inevitable.
“Furthermore; we encountered vigilante groups while travelling from Nsukka to Abia state but refused to open fire at them. We appreciate the effort of vigilante groups but it is high time they left the roads and go into our communities. They should guide our communities and leave major roads.
“Because we won’t leave them next time because they work with the occupational government and are a threat to the people’s army. We are warning them to resign or go into our communities alone; we will protect our roads and should they continue their vigilante whatsoever; we will see them as enemy link.
“The people of Biafra should not panic; everybody should remain calm because we are on top of the situation. It is a gradual process; we will protect our people from the terrorists terrorizing them. We have seen enemy soldiers burning down houses, shops and killing innocent Biafrans. We will work harder to protect our people from the occupational soldiers.
“Finally, Biafra is a sovereign state and we will not hesitate to stamp our sovereign authority. The first line of that sovereignty is the defense of our lives being taken at will by the occupational forces of the federal government of Nigeria. We will not relent until there is peace and safety of lives in our land.”
By makarella - December 14, 2021