Wizkid Collects Phone From Fan at Concert, Records Himself Before Returning It (Video)

He requested the phone of a fan who was trying to capture every moment of his performance. 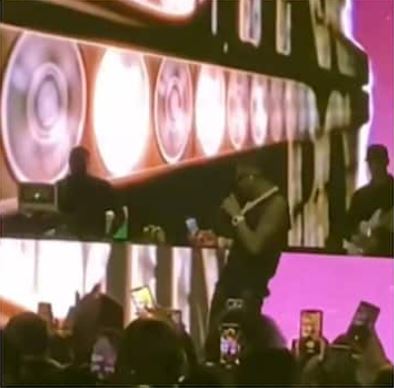 Globally-recognised Nigerian singer, Wizkid recently made the day of a dedicated fan after going the extra mile to give the individual a rare fandom moment.

The superstar was performing a track off his Made in Lagos (MIL) album and he took a moment to indulge one of those in attendance.

He requested the phone of a fan who was trying to capture every moment of his performance.

Wizkid then proceeded to instruct the DJ to turn the music down and he also urged members of the audience to keep their voices down.

This was followed by the music star recording himself on the fan’s phone and giving a shout out to everyone watching.

Wizkid’s actions sent members of the audience wild with excitement as they couldn’t stop cheering. The fan who gave out the phone was also beaming with happiness after Wizkid handed the device back.

Watch the clip below: