The two suspected hoodlums were arrested while the police were combing hideouts believed to have been used by traffic robbers. 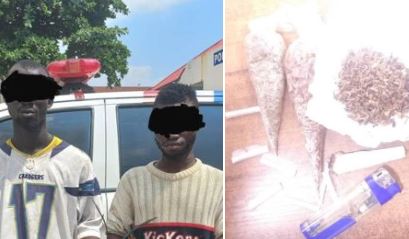 Two suspected traffic robbers dispossessing motorists of their belongings have been apprehended by men of the Rapid Response Squad of the Lagos State Police Command along the Iyana Oworo to Old Toll Gate, Ketu stretch of Lagos – Ibadan Expressway.

A statement released by RRS says the two suspected hoodlums were arrested while combing hideouts believed to have been used by traffic robbers before attacking motorists.

The suspects identified as Ojo Saheed (21) and Khalid Oluwole (28) were arrested on Friday night around Old Toll Gate, Ketu in company of several other miscreants who escaped the scene on sighting members of the squad in the area.

The suspects, in their statement to the police explained that they were taking Indian hemp and ICE in order to stay awake through the night.

Commander RRS, CSP Yinka Egbeyemi, who was on the axis yesterday to assess the positioning of officers of the squad, assured that the Commissioner of Police, CP Hakeem Odumosu's directive that consistent police presence in the area be maintained, would be complied with totally.

Egbeyemi added that RRS officers would patrol the area regularly till January, 2022.

Recovered from the suspects were wraps of Indian hemp and crystal methamphetamine (ice).

The suspects have been transferred to Lagos State Mobile Court for prosecution.
By makarella - November 16, 2021