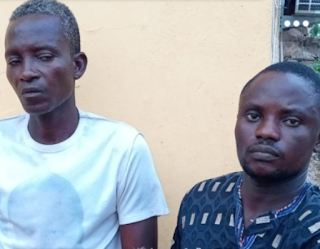 Police in Ogun State has arrested one Monday Karezu with a decomposing human head and investigation revealed he had killed his daughter for rituals and had also beheaded another corpse for the same purpose.

The 32-year-old Karezu, who is a citizen of Benin Republic, was arrested alongside 44-year-old Anagonou Kamelan, on November 3.

Their arrest came after men of the Modus Operandi section of the state CIID got a tip-off that the men would visit a herbalist with the human head which they planned to use for money ritual.

With the information, the DSP Nurudeen Gafar-led team was said to have mobilised his men to the herbalist’s house, where the suspects were nabbed after two hours of laying ambush for them.

Monday Karezu had lied to the police that he got the head from a place known as Ijale papa; "but investigation revealed the human head with him was that of a woman who died three months ago during childbirth," the Ogun police spokesman, Abimbola Oyeyemi told newsmen on Sunday, Nov. 14, adding that the corpse was buried near the suspect’s house.

Oyeyemi said, "It was further discovered that the suspect had one time killed his nine months old daughter and used her head for the same purpose but did not succeed.

"He had also exhumed another corpse, removed the head and used it for money making ritual but failed."

Karezu’s accomplice, Kamalen, a Togolese, had told him that "he knew an herbalist who can do ‘original money making ritual’ with human head."

This, Oyeyemi said, prompted the exhuming of the corpse. He then cut off the head of the corpse and took it to the herbalist’s house.

The state Commissioner of Police, Lanre Bankole, has ordered a full investigation into the past activities of the suspects.