The terrorists, according to inside sources, returned again on Thursday morning to plant an explosive device on the rail track, but the train surmounted the hurdle to reach the terminus. 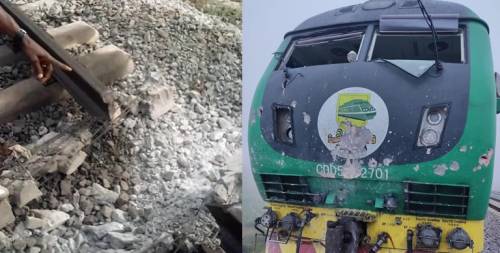 According to Daily Nigerian, security agencies and their operatives failed to avert the attack on Abuja-Kaduna train service of the Nigerian Railway Corporation by a terrorist group, Darul Salam, despite interception of information two days earlier.

It was reported that the terrorists first attacked the train on Wednesday night and successfully immobilised it after struggling to move for 7 kilometres after the attack.

The terrorists, according to inside sources, returned again on Thursday morning to plant an explosive device on the rail track, but the train surmounted the hurdle to reach the terminus.

According a security report seen by Daily Nigerian, communications between a notorious bandit, Baffa, and his associate, Bala, (not real names) were intercepted by the security agencies.

The report, dated October 19, 2021 and entitled “PLANNED ATTACK ON TRAIN AROUND RIJANA, KADUNA STATE”, said the terrorists were heard discussing about the planned attack by Darul Salam terrorists in concert with two bandit kingpins, Danlami and Lawan (not real names).

“Baffa informed Bala that members of Darussalam (Boko Haram) in collaboration with bandits led by Danlami and Lawan are currently on their way to plant a bomb at a bridge on the railway in Rijana to hijack a moving train and kidnap the passengers. Baffa said he decided not to participate in the operation because it is risky but believed that DANLAMI and LAWAN will blow up the bridge,” the report said.

It was gathered that the report was circulated across security agencies, but no proactive measures were taken to abort the attack.

The spokesman for the Kaduna State Police Command, Mohammed Jalige, declined comment on the matter, saying the railway infrastructure and its security are under the command of a Commissioner of Police in charge of railways.

When contacted, the Commissioner of Police in charge of railways, Oyediran Oyeyemi, referred inquiry to the Force spokesman, Frank Mba.

Mba neither picked his call nor responded to a message seeking police response on the security report.