Busted! Photo Of 2 Foreigners Who Buy And Supply Explosives To Fuel Crises In Nigeria & Cameroon

Due to the crisis in Cameroon between the separatists and the government, it has forced a lot of people from Cameroon into Nigeria through the boarders. 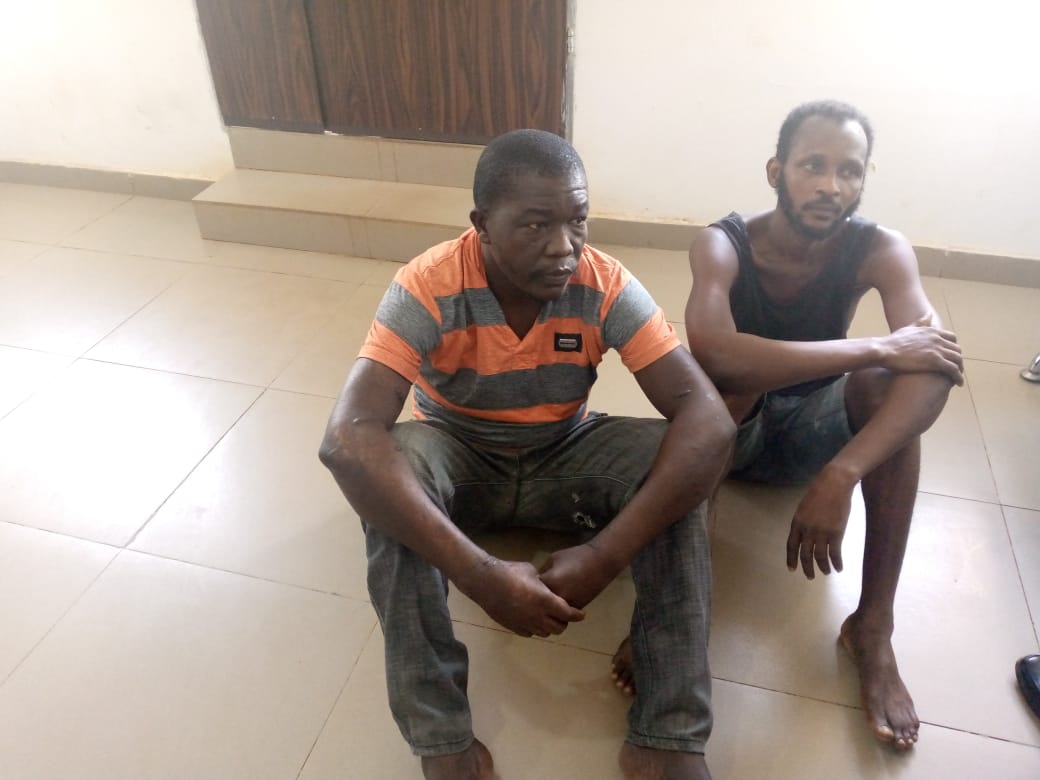 In what will come across as a rather startling development, the Nigeria Police Force Intelligence Response Team, IRT, has arrested two suspected foreigners.

They were nabbed for illegal possession and illicit sales of explosives using Nigeria border to supply explosives to fuel the crisis in Cameroon.

P.M.EXPRESS reports that following the current security situation across the country, the Inspector General of Police, IGP Usman Alkali Baba, has vowed to battle crime to its bearest level and also taking a zero tollerance approach to any one who is found with illicit weapons or exploiting the crisis in Cameroon to deal in ammunitions in order to make selfish gains.

In view of this, the men of the Nigeria Police IRT swooped on some men, who supplies explosives to fuel crisis in Cameroon.

The two arrested suspects in connection with the crime are 38-year old farmer, Obi Ndifon Bate, from the Nmojosob division in Cameroon and the main suspect, 40-year old Ntui Lambart Assam, from Ntui Local Government area of Cross River State, whose mother is a Cameroonian.

According to the 38-year old Ndifon Bate, he only comes to Nigeria to do menial jobs but was unfortunate to have been arrested in Ikom Local Government area of Cross River State alongside Ntui, who he claimed to be his cousin.

Due to the crisis in Cameroon between the separatists and the government, it has forced a lot of people from Cameroon into Nigeria through the boarders.

In view of this, the Nigeria Police Force in order to curb crime in its borders, sorted intelligence gathering and discreet investigation to arrest anyone involved in illegal sales of any ammunition or involving the use of Improvised Explosive Devices (IEDs) through the border to cause high rate of crime.

Speaking to P. M. EXPRESS, Ndifon, who further explained how he got involved in the crime, said, “I am a registered member with the United Nations. My wife was pregnant and the baby died inside of her. I went to Calabar to collect money. Ndifon, who according to him, went to Ikom to collect money from his brother, confessed to be aware of the kind of illegal business his brother was into”.

He said, “I am aware that my cousin is into the business of selling dynamite and he sells them to Cameroonians but I was not involved in the business. I was only unfortunate to be around when the IRT men came around to make arrest”.

The suspect, who is referred to as General Assam Lambert Ntui (Black Mamba) of Manyu, was arrested in Ikom in Cross River State.

The 40-year old Assam Ntui, who is from Ntui Local Government of Cross River but whose mother is from Southern Cameroon, said he was arrested in his house in Ikom.

Narrating his story, Ntui said he was introduced into the business of selling explosives and ammunition through a friend, who he met in his home town in 2019, though he has successfully done the business five times between the space of three years and claim it is not a regular business he does.

He said, “I was introduced to this business of selling dynamite by a friend I met in Ikom, though he’s now based in Jos. When we met, we were discussing the crisis going on in Cameroon. He said the fighters will need ammunition and if the need arises I should contact him, which I did. I contacted him the first time in 2019; when I send him money, he will send the explosive to me.

Ntui denied having knowledge of where he gets the ammunition or explosives from.

According to him, “I don’t know where he get those things from. I only contact him when I needed them; I will pay him money and he will send them to me. The explosives do not come regularly; it comes every five month at times”.

“They send it with waybill by road through trailers and the drivers will call me and give it to me. I don’t know the faces of the guys that come with them because they always hide their faces. Some of them mask their faces while some will hide inside the trailer but the drivers are the ones who deliver the explosives and ammunition well wrapped to me.”

He further said, ”The Cameroon boys give me the money to buy the explosives in bulk for them.They give me N70,000 or N80,000 and I purchase and give to the fighters in Cameroon to face the crisis in their country. The fighters compensate me with 20 to 30 thousand Naira”.

“When I was arrested in my house in Calabar by the IRT men, I was taken to a bar I manage in Ikom, where they discovered some dynamites in my custody.”

The suspect denied knowing the suppliers of the dynamite. He claimed they are from the black market and has disclosed their phone numbers to the Police when he was taken to Uyo in Akwa Ibom State.

Ntui, who some time ago was burnt by unknown explosive, said he is married with five kids and regretted getting involved in the illicit business and promised to practice how to be of good attitude and the word of God he learnt while in Police custody.