According to the court indictment, the scheme involved using multiple false identities and counterfeit drivers’ licenses. 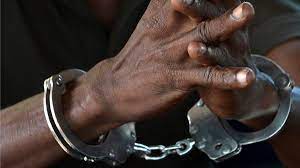 Two Nigerian scammers have been arrested in the United States.
Norbert Ozemena Ikwuegbundo, 28 and Omniyi Jonathan Omotere, 35, both living in Las Vegas, Nevada risk 97 and 49 years in prison for allegedly scamming Americans $3.3 million in house rent.
According to the court indictment, the scheme involved using multiple false identities and counterfeit drivers’ licenses.
The duo were charged with one count of conspiracy to commit wire fraud. In addition, Ikwuegbundo is charged for possessing equipment used to make counterfeit drivers’ licenses, one count of concealment money laundering, and one count of aggravated identity theft while Omotere is charged with one count of wire fraud.
The case was investigated by Homeland Security Investigations (HSI), and the Department of State’s Diplomatic Security Service (DSS) Los Angeles Field Office; prosecuted by Assistant U.S. Attorney Kimberly Drain.
In the indictment, it was stated that from about March 2018 until about September 2019, the defendants and others engaged in the scheme.
The document alleged that Ikwuegbundo and Omotere assumed the identities of homeowners who were advertising on websites to rent their properties.
They reduced rent prices, using the names and personal identifiers of true homeowners but changing the contact information to email addresses and phone numbers controlled by the duo — sending false rental agreements for victims to sign.
The defendants were alleged to have laundered proceeds from the scheme by using some of the stolen money to buy cars at auction.
If convicted, Ikwuegbundo faces a statutory maximum sentence of 97 years in prison and Omotere faces a statutory maximum sentence of 40 years in prison.
Share this news:
By makarella - September 10, 2021