Oh No! Footballer Dies During Morning Training On The Day He Was Meant To Leave Nigeria For Europe

The Anambra-state born started with Lion heart Football Club domiciled in Ayobo community for three years, where he trained and honed his skills as a right full back, and sometimes played as a central midfielder. 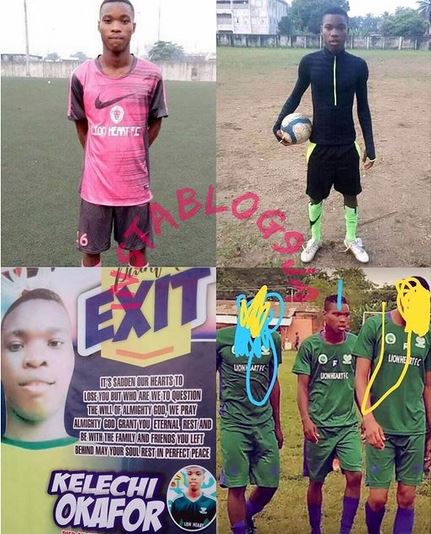 21-year old Nigerian footballer, Okafor Kelechi has died just as he was selected to travel to Europe to play football, according to Vanguard.

When Kelechi was selected alongside two of his football team members to travel to Azerbaijan, in  Eastern Europe where he was to be signed on to kick-start his career professionally he felt fate had finally smiled on him.

The Anambra-state born started  with Lion heart Football Club domiciled in Ayobo community for three years, where he trained and honed his skills as a right full back,  and sometimes played as a central midfielder.

Elated at the news which he described as prayer answered ,  kelechi started shopping for personal effects and other valuables   he would travel with, while his club processed all necessary travel documents.

While these preparations were ongoing, never in his wildest imagination did he envisage that fate had another bargain for him. Unfortunately, his dream came crashing like a pack of cards on  August 10, 2021, while he  and his teammates were practicing on the training ground at Idowu Fadeyi, Ayobo, Ipaja. Ironically, it was the same day he was supposed to travel.

Sadly, the plane left the  tarmac of the Murtala Mohammed international Airport that night, without Kelechi.

As you read this piece, his remains are in the morgue , waiting to be interred this evening.

Explaining how the tragedy occurred,  one of his teammates,   said, “the incident happened on the very day Kelechi  and three others were  supposed to travel to Europe.

“We had gone for training that day. He went for an aerial battle. On his way down, he lost balance and hit his head on the ground.

“Immediately, the coaches administered first aid on him, trying to revive him. When it didn’t yield any result, they rushed him to the hospital.  But he died on the way.

When we got to the private hospital located in  Ayobo area, doctors declared him  Brought in Dead.

“From there the coaches went to Ayobo Police Station to report the incident. The police came to the  training ground at Idowu Fadeyi, Ayobo, Ipaja where the incident happened. The policemen questioned some of the players, took photographs before going to the hospital”.

“I got so emotional, I couldn’t control myself as I began to cry when I saw the lifeless body of Kelechi being put inside a body bag.  His corpse was deposited at the Yaba morgue “

It was learned that, when Kelechi’s uncle, Chukwudi and his elder brother Uche came to pitch, everybody was in a sober mood.

The club Manager  was said to have explained  what happened, as well as  the efforts of teammates and coaches. Thereafter, the relatives  went back to the police station, to see the DPO and inform them that they wanted  the case closed since it wasn’t a murder case.

Late  Kelechi’s elder brother, Uche lamented that “ It’s unfortunate that Kelechi died on the same day he was supposed to travel, his flight ticket had been purchased, the flight was scheduled for 8:45pm and he died before noon. Kelechi is the last born in our family.  Our parents are alive and they are devastated by the news. Kelechi will be buried on Saturday  September 4,2021″.