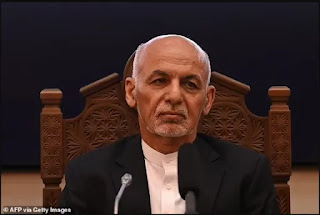 Afghan President Ashraf Ghani fled his country with $169million in his cash-stuffed helicopter and has been given asylum in Dubai on 'humanitarian grounds,' it has emerged.

Ghani fled the country on Sunday night to avoid bloodshed, as the Taliban closed in on the capital Kabul.  He reportedly took with him four cars and a helicopter loaded with $169million in bags of cash - but was forced to leave some of the money behind as it would not all fit in the flight.

Earlier reports said Ghani had fled to Uzbekistan, citing Russian Embassy sources. It was also claimed that the former president had flown to Tajikistan, but diverted to Oman when officials in Dushanbe refused him permission to land.

Nikita Ishchenko, a spokesman for the embassy, said: ‘As for the collapse of the regime, it is most eloquently characterised by the way Ghani fled Afghanistan.

‘Four cars were full of money, they tried to stuff another part of the money into a helicopter, but not all of it fit. And some of the money was left lying on the tarmac’.

But the United Arab Emirates said today that it was hosting Afghan President Ashraf Ghani in Dubai 'on humanitarian grounds'.

The UAE said in a statement: 'The UAE Ministry of Foreign Affairs and International Cooperation can confirm that the UAE has welcomed President Ashraf Ghani and his family into the country on humanitarian grounds'.

Surprisingly, Afghanistan's Vice President Amrullah Saleh stayed back in the country and retreated to his hometown in the Panjshir Valley - the only region the Taliban have not conquered. He is said to be massing troops to resist the militants.

The Afghan Embassy in Tajikistan, which reportedly refused Ghani refuge, has removed the former president's picture and replaced it with Saleh. 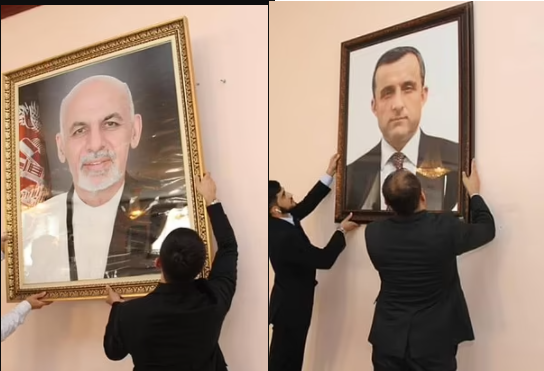