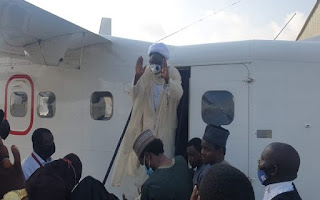 Mrs. Zeenat Ibraheem, wife of leader of Islamic Movement in Nigeria (IMN) has been flown abroad for treatment barely 48 hours after she and her husband, Ibraheem Yaqoub El-Zakzaky were released from DSS custody.

The couple on Wednesday July 28, were discharged and acquitted by a Kaduna high court from the eight charges filed against them by the State Government for lack of merit.

It was also learnt that Mohammed El-Zakzaky, son of the IMN leader also travelled with her.

Mohammed in a statement released on Friday July 30, said;

“As you are aware, yesterday my father Sheikh Ibraheem Zakzaky and Mother Zeenah Ibraheem have recently regained their freedom, after the Kaduna state High Court discharged and acquitted them of all charges filed by the current Kaduna State Administration.

“I along with our entire family, wish to especially thank those men, women and children who stood firm in the face of injustice, risking life and limb to demand justice and freedom for them, both inside and outside this country.

“Of special note are the heroes who marched daily in Abuja non stop for 5 years, a monumental act of sacrifice seldom heard of and certainly unprecedented in the history of Nigeria.

“I wish to express our gratitude to human rights organizations who continued to help provide us with a voice during this difficult time.

“Of special note Amnesty international, Human Rights Watch and especially The Islamic Human Rights Commission for ensuring that the Atrocities carried out in December 2015 could not be simply covered up.

“We hail the efforts of free media and those journalists whose commitment to the truth shone even in the face of censorship, threats and often lethal violence.

“We commend your steadfastness and bravery, and wish to thank you for all those times you refused to turn a blind eye to tyranny, discrimination and other crimes being committed in the name of the state.

“Last but certainly not least I wish to thank my parent’s competent and loyal legal team that was ably led by Chief Femi Falana SAN, who despite all the malicious maneuvers to delay, manipulate and obstruct judicial due process, the legal team persevered and ultimately prevailed. We will be eternally grateful for your efforts.”