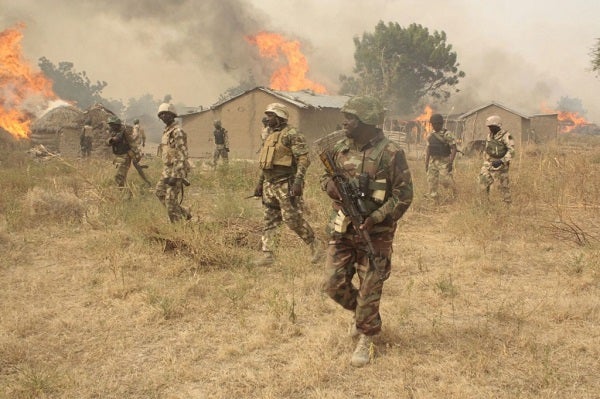 File photo
Seven Nigerian soldiers have been killed in an ambush by Boko Haram terrorists.
According to PREMIUM TIMES, the soldiers died after an improvised explosive device planted by Boko Haram terrorists exploded in Borno state, Nort-east Nigeria,
The latest attack came less than a week after the appointment of a new Chief of Army Staff, Farouk Yahaya.
Mr Yahaya, a major general, was appointed last Thursday following the death of the former army chief, Ibrahim Attahiru, in a plane crash recently.
According to sources familiar with the situation, a senior military officer and four other soldiers were severely injured by the explosive.
The incident , which occurred at about 10:15am on Monday, is one amongst the many traps the terrorists have used against the military, security sources said.
The officer, a colonel, whose name was not given, was said to have been on his way from Marti, a town in Borno State to the state capital, Maiduguri, together with his 11 soldiers in a gun truck.
The wounded personnel were later moved to a military hospital in Maiduguri.
Troops of the Nigerian Armed forces have suffered many attacks from the Boko Haram terrorists.
Groups like Boko Haram and the Islamic State’s West Africa Province have terrorised Nigeria’s North-east geopolitical zone for more than a decade.
This has led to the death of thousands of soldiers and civilians and has displaced thousands of residents.
Despite repeated attacks on troops and vulnerable citizens, the government has continued to claim that the terrorists have been defeated.
By makarella - June 01, 2021