They were charged with conspiracy to defraud and putting false information into the computer system, said the CSD commander in a report by Bangkokpost. 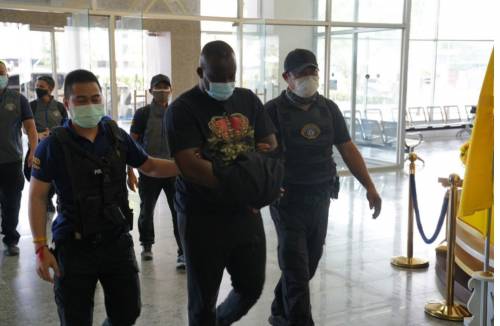 SaharaReporters reports that a Nigerian man and five Thais have been detained in Bangkok following a police raid over a romance scam that made at least 200 million baht in a year.

A police search of seven locations in Bangkok, Nakhon Sawan, Phuket and Pathum Thani on Monday led to the arrest of the six suspects, Pol Maj Gen Suwat Saengnoom, chief of the Crime Suppression Division, said on Tuesday.

They were charged with conspiracy to defraud and putting false information into the computer system, said the CSD commander in a report by Bangkokpost.

The arrest came after a victim filed a complaint with Pol Maj Gen Jirabhop Bhuridej, deputy commissioner of the Central Investigation Bureau (CIB), last year, saying she had been swindled out of 1 million baht in a romance scam.

CSD investigators began the probe and found that the gang, comprising both Thais and foreign nationals, had colluded in swindling the complainant.

One member of the gang opened an Instagram account under the name Mr Lanny Gray. He then approached the victim, claiming to be an American businessman working in Malaysia.

After befriending the victim, the man switched to communicating through the Line chat app, sending numerous messages and promising to live in Thailand with her. After gaining her trust, he told her she would send parcels containing valuable items to her.

Another gang member, a Thai, later contacted the victim by phone, claiming to be an agent from a shipping firm and telling her to pay fees to receive the parcels.

The woman had paid almost 1 million baht but had yet to receive any packages, said Pol Maj Gen Suwat.

After receiving money from the victim, the gang also tried to swindle more money from her. Another gang member, claiming to be a hospital employee from Malaysia, had phoned her and said Mr Lanny Gray had suffered serious injuries in an accident and was under treatment at a hospital.

The impostor had asked her to pay almost 500,000 baht in medical bills for Mr Gray. The woman became suspicious and tried to contact him but failed. She decided not to wire the money and filed a complaint with the police at Wang Thong Lang police station.

Pol Col Wiwat Jitsophakul, superintendent of the CSD sub-division 3, who led the arrest, said investigators took more than five months to find clues about seven people involved in the scam.

Several women had fallen victim to the gang over the past few years, said Pol Col Wiwat.

The gang had used about 50 bank accounts of other people to receive money transfers from victims. Once the money had been transferred, they used ATM cards to withdraw the money and deposited it to personal bank accounts, said the sub-division three chiefs.

Between 2020 and 2021, about 200 million baht had been in circulation in a bank account held by Ms Punyawee, said Pol Col Wiwat.

The Nigerian suspect had run a restaurant and a currency exchange shop as front businesses to conceal his wrongdoings. Police seized documents from those businesses for examination.

The CSD investigators also found that the Nigerian suspect had committed a similar offence in 2018 in Chiang Mai by claiming to be a decommissioned South African military officer to lure his victim online. The investigators believed several women had fallen victim to this gang.

During the questioning, the six suspects denied all charges. They were handed over to Wang Thong Lang police for legal action. Police were extending the investigation and tracking down the seventh suspect, who was still at large.

Posted by makarella at 9:53 AM