Lawyer Storms INEC Headquarters, Protests Against Use of National Identification Numbers As Election Data Base

The lawyer said the process has been compromised and does not represent the true demographics of the country. 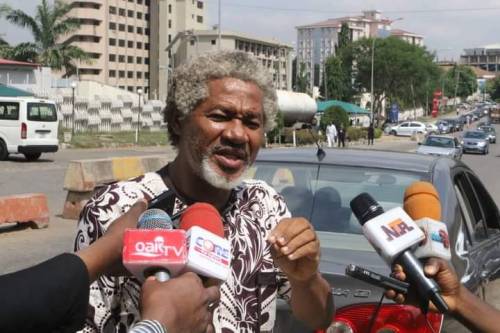 Malcolm Omirhobo, a Lagos-based human rights lawyer, on Wednesday staged a lone protest at the headquarters of Independent National Electoral Commission (INEC), Abuja against the use of National Identification Numbers (NINs) as data base for elections in Nigeria, according to SaharaReporters.

The lawyer said the process has been compromised and does not represent the true demographics of the country.

Omirhobo also submitted a formal letter addressed to the Chairman of the commission, Mahmood Yakubu,

noting that the procedure for registration of the NIN violated the provisions of Sections 25, 26 and 27 of the 1999 Constitution of the Federal Republic of Nigeria (As Amended).

He added that the exercise does not give room for the profiling of the applicants and the verification of the documents submitted by them unlike in the case of the international passport and the Bank Verification Number (BVN).

The letter reads, "Our porous borders have not help matters as day in, day out Africans from other African countries enter into Nigeria because of our poorly manned borders and corrupt border guards. Many of these illegal aliens now have the NIN and are ipso facto Nigerian citizens.

"The negative effect of the abuse of the ECOWAS protocol on free movement on the registration exercise of the NIN in Nigeria cannot be over emphasised.

"Also, why the NIN must not be used in Nigeria for any purpose is the inability of the person in charge of its registration, Dr. Isa Ali Pantami, Nigeria’s Minister of Communications & Digital Economy to clear himself of his involvement with terrorist sects like Al-Qaeda, Taliban, Boko Haram, Islamic State of Iraq and Syria (ISIS) and Islamic State of West Africa Province (ISWAP) and the failure, refusal and/or neglect of the Nigerian Government to make him defend himself.

"The government has shielded and defended him, refusing to fire him, notwithstanding that the generality of Nigerians have lost confidence in the said minister’s continue handling of sensitive data of the country."

The lawyer however submitted that it would be criminal, unlawful, and unconstitutional for the electoral body to use the NIN as data base for any election in the country.

"Applicants are not profiled by the police, the Department of State Services or the Immigration Service. The process of obtaining NIN is not thorough or watertight.

"The personnel receiving data are not trained for the job, neither are data submitted by applicants verified to their residence and to the local government level to ascertain their veracity," he added.