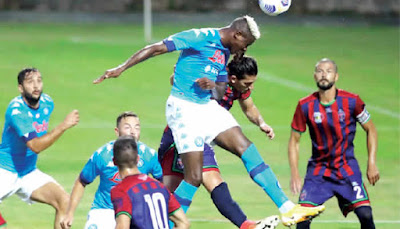 In the wake of his latest head injury in Serie A, sports doctor Bukola Ojuwoye has urged Napoli striker Victor Osimhen to be careful, warning that persistent concussions could lead to memory loss in the future.

The Nigeria international suffered a nasty collision, which required bandages to his head in the Partenopei’s 1-1 draw against Cagliari on Sunday and was replaced in the 75th minutes by Dries Mertens, making it the second time that he had suffered such injury in two months.

The former Lille though took to his Twitter account to assure fans that he was fine and would be available for Napoli’s next fixture but Dr Bukola, in an interview with Saturday Punch, pleaded with the striker to be more careful, to prevent memory loss.

He said, “Any head injury is called concussion and the symptoms of the concussion is dizziness loss of memory, lack of coordination sleepiness. Even in rugby when you check you will be able to see how badly they are affected. There is loss of memory, Parkinson and so many other effects. I can’t exactly mention all of it now but majorly these are the side effects of having constant head clash.

“As long as he is getting good care we don’t expect any complications. But he also needs to be more careful when playing and get regular check up to prevent complications of multiple concussions. Head injury and concussion has protocols observation for at least 24 hours and a doctor to certify fit to return play after treatment and filling the SCAT 5 form.

" If he is properly taken care of now he is not going to have many issues but otherwise, they may start giving him warning on how to play because maybe he is not doing the right thing.

“My advice to Osimhen, is to always get good care and clearance to play. He must get regular check to prevent complications. He also must protect himself and play safe because as more frequent this happens, the more of risk of him having issues (memory loss) but he needs to very careful.”