It was learnt that the five suspects, who were busted in a hideout, were tied by the youths with ropes and handed over to the police in the area. 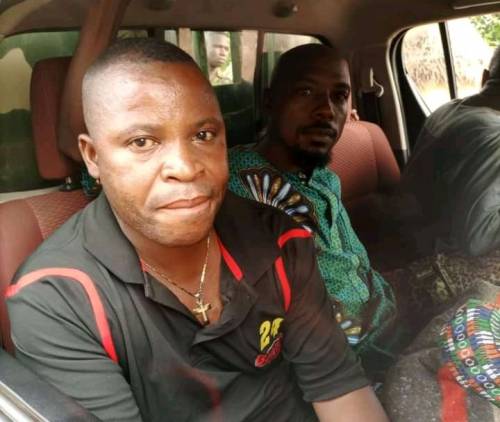 Some really angry youths in Omu Aran town in Kwara State on Friday intercepted and arrested five Yoruba men who were working with dare-devil herders to kidnap residents of the area for ransom, according to SaharaReporters.

SaharaReporters learnt that the five suspects, who were busted in a hideout, were tied by the youths with ropes and handed over to the police in the area.

According to a video of the incident recorded by a witness and obtained by SaharaReporters, an angry mob could be seen dragging the suspects into a police van as they expressed shock.

The police van later whisked them away.

An eyewitness said it was shocking for residents of the area to discover Yoruba informants among the gang of kidnappers-turned herdsmen.

“They were caught on Friday. Their hideout was busted by youths assisted by men of the Amotekun. There are Yoruba among them – not all of them are herdsmen or Fulani. We have informants working with these criminals. They were lucky to have made it to the police,” he stated.

SaharaReporters had on Friday reported that the soldiers also burst a hideout of kidnappers in Oke Ero area of Kwara State.

SaharaReporters had learnt that the soldiers acting on intelligence stormed the forest in between Kwara and Ekiti states and arrested the Fulani kidnappers, recovering 100-dollar notes from them.

A source in the area had noted that the kidnappers had been notorious for several kidnapping incidents in the area, adding that the criminals had “just collected ransoms from some of their victims.”

Another source had stated that the suspects were believed to be among those who had abducted Oba David Oyewumi, the Obadu of Ilemeso Ekiti, who was in Oye Local Government Area of Ekiti State but rescued from a forest in Kwara State.