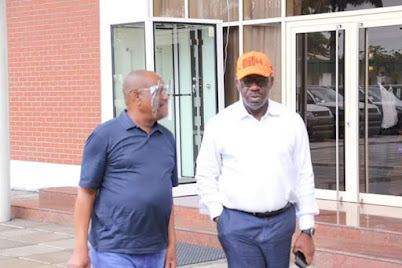 Governor Nyesom Wike has backed Governor Godwin Obaseki on his claim of the federal government printing N50-60 billion for states to share in March.

Addressing journalists on Sunday April 18, Wike stated that Obaseki couldn’t have come from the blues to say the federal government printed N60 billion.

He also accused Governor of the Central Bank of Nigeria, Godwin Emefiele of refusing to answer a question he was asked on printing of money and instead talked about bailout funds.

“Obaseki was in APC, so he understands them. So, Obaseki couldn’t have come from the blues to say they printed N60 billion. He knows them.

“Instead of answering the question, he (Emefiele) said governors have to pay back the bailout loan. Bailout is a loan, if you want to take it, go and take it. But answer the question whether money was printed or not printed.”

Posted by makarella at 9:11 AM