Women stripped and tore their clothes into a state of semi-nudity and accused Governor Wille Obiano and his administration of land grabbing for personal gain. 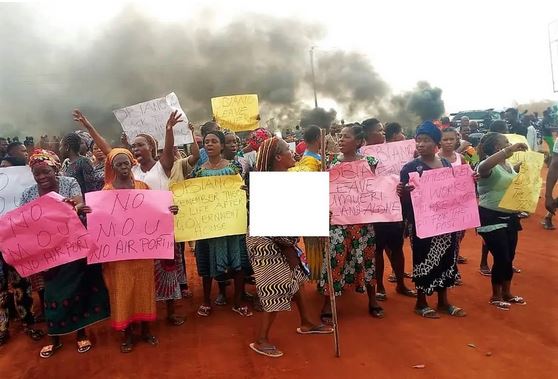 According to a report by Daily Trust, hundreds of women Umueri in Anambra East council area have staged a protest.

The women, on Mondays took to the streets to protest the state government’s forceful takeover of their land under the pretext of building an airport—and they did it half-naked.

Women stripped and tore their clothes into a state of semi-nudity and accused Governor Wille Obiano and his administration of land grabbing for personal gain.

In the half naked state, they marched round the airport premises, set up bonfires on the airport road while they chanted.

They vowed to resist attempts to take away their children’s inheritance.

Among complaints written on their placards, they said, three communities of Enuagu, Umuinu and Umuopu gave 729 hectares to the government under former governor Chris Ngigie, but Obiano’s government forcefully took another 1,200 hectares.

“Obiano, go back to the 729.606 hectares of land originally gazette for the airport project,” they wrote on one placard.

In another, “We can’t allow this project to go on if the government signs no MOU with our community,” and then, “Anambra government has taken over our lands; where do we farm? Are we to become refugees in our own land?”

Speaking, the chairman of community,  Uchenna Ndumanya described the development as  unfortunate and wicked.

“We are the people of Ifite Umueri. We are  the people that donated airport land to the Anambra State Government during the Dr Chris Ngige regime, about 14 years ago.

“When we donated the land we gave them about  729.66 hectares but now they have left that particular place we donated to them and just encroached into our individual land.

“They are now encroaching into about 1901 hectares, about three times of what we gave to the state government.   We had our first protest on the matter in 2019. And since then nothing has been done.

“We have petitioned to the Commissioner of Police, the Directorate of State Service, nothing has happened.  We have gone to governor’s office; gone to SSG’s office. Day-by-day, they are building on the land with impunity; sharing the land amongst themselves. And the particular place we gave them, they left it and nothing has been done there.

Ndumanya said, if government was allowed to have it way on the matter, no fewer than 300 building in the community would have  been demolished.

He said, “The airport work is going on but not  on the land we originally  gave the government. They  have rather shared the original land we gave them amongst themselves and encroached into our individual land to build the airport. The implication is that Aguleri has succeeded in relocating Umueri from our ancestoral and original place. We don’t want the airport again. We can’t be displaced because of the airport. We thought the airport will bring development to our land, we didn’t know they are thinking of another. We will continue this protest by staying for one month on this road. All these houses, schools will be demolished according to their plans for the airport.

“The whole of this community will be displaced if we allow this their evil machinations to work. We won’t allow that to be.”

On behalf of the state government, the commissioner for works Marcel Ihejiofor did not comment.

He told Daily Trust he was in an exco council and could not speak on the matter.