The event, which is the 11th edition of the annual Arewa House lecture, took place on Saturday at the Arewa House Banquet Hall, Kaduna. 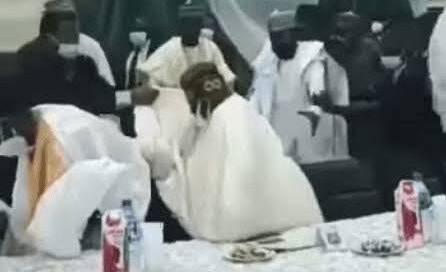 Bola Tinubu, the National leader of the All Progressives Congress (APC), nearly fell at a public function recently.

The man tripped over his foot and stumbled as he made his way to his auditorium seat where the 2021 annual Arewa House Lecture was held.

The event, which is the 11th edition of the annual Arewa House lecture, took place on Saturday at the Arewa House Banquet Hall, Kaduna.

According to a trending video, Tinubu crashed between two chairs on arrival at the 11th Arewa House Lecture in Kaduna.

His aides and nearby guests quickly supported him.

Tinubu spoke on the topic “Reduction of the Cost of Governance for Inclusive Growth and Youth Development in Northern Nigeria in a Post-COVID-19 Era,” admitted the high unemployment rate in Nigeria.

He also warned against wasteful spending amongst government officials, saying the government must spend money to yield economic returns for the benefit of the masses.

Tinubu, a former Lagos state governor, played a key role in the political merger of 2013, which created the APC.