It was gathered that the commercial sex workers were arrested by the Oyo State command of NSCDC during three separate operations. 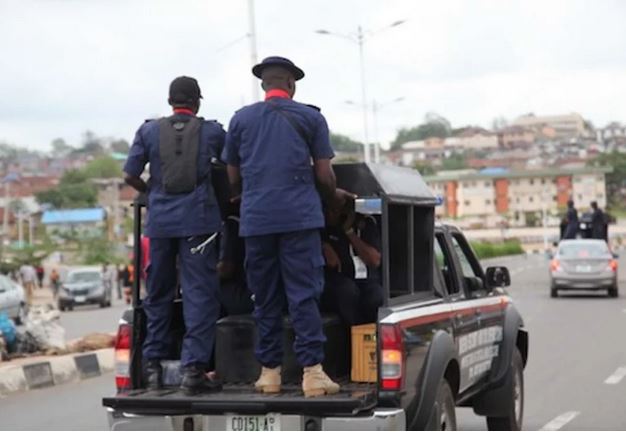 No fewer than 15 commercial s*x workers have been arrested by the Nigeria Security and Civil Defence Corps (NSCDC) in Ibadan, the Oyo State capital.

According to DAILY POST, it was gathered that the commercial sex workers were arrested by the Oyo State command of NSCDC during three separate operations.

DAILY POST reliably gathered on Saturday that the commercial sex workers, also known as “Olosho” were arrested following a complaint by owner of a club located at Bodija area of Ibadan.

Our correspondent gathered that the owner of the club had complained to NSCDC that the Olosho who are staying outside were ‘killing the business’ for the ones inside that paid.

NSCDC officials swung into action and began a clampdown on the Olosho who were staying outside. In the three operations, 15 of the them were arrested, DAILY POST gathered.

An eyewitness narrated his experience on Friday that the Olosho were arrested around 9.30 pm.

“Just being curious, I want to ask a question. Is it also the official responsibility of Civil Defence Officers to arrest Olosho. I kept a bit night outside today and had to drive through Awolowo Avenue at Bodija around 9.30pm, where I saw these Civil Defence officers with guns arresting those runs ladies and forced them into their official bus.”

An official of NSCDC who asked not to be named told DAILY POST on Saturday that those arrested on Monday and Wednesday had been released.

He said, “The owner of Platinum Arena reported the Olosho to the Command of NSCDC that those staying outside were killing the business for the ones inside that paid.

The Public Relations Officer of NSCDC in the state, Mr. Olusegun Oluwole, when contacted confirmed the arrest of the “Olosho”.