The suspect defrauded a man by presenting himself as possessing the power of increasing and doubling money through sacrifices and invocation. 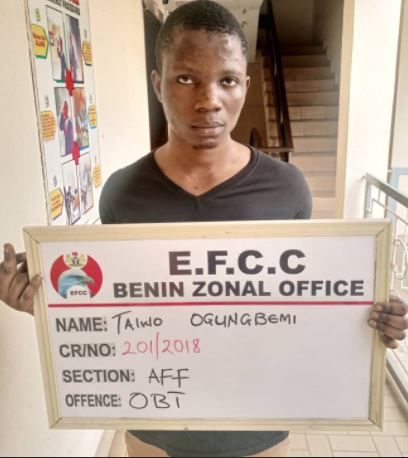 A man identified as Ogungbemi Taiwo has been sentenced to 8 months in jail by Justice A .A. Demi-Ajayi of the Federal High Court sitting in Benin City, Edo State for fraud.

A statement released by EFCC says Taiwo who was prosecuted by the Benin Zonal Office of the agency had in August 2020 defrauded one Alkairu Sani of the sum of Nine Million, Two Hundred and Twenty-Five Thousand Naira (N9,225,000) by representing himself as possessing the power of increasing and doubling the said sum through sacrifices and invocation.

"that you Ogungbemi Taiwo on or about the month of August 2018 in Benin, Edo State within the jurisdiction of the Federal High Court of Nigeria did with intent to defraud induced one Alkairu Sani to pay the aggregate sum of Nine Million, Two Hundred and Twenty Five Thousand Naira (N9,225,000) only into Account Number 0041475970 domiciled in United Bank for Africa belonging to Moradeke Elizabeth Farotimi by representing yourself as possessing the power of increasing and doubling the said sum through sacrifices and invocation of juju, a pretence you knew to be false and thereby committed an offence contrary to Section 2(b) of the Advance Fee Fraud and Other Related Offences Act 2006 and punishable under Section 2(C) of the same Act."

Taiwo pleaded guilty when the charge was read to him.

In view of the plea of the defendant, the prosecution counsel, I.M.Elody asked the court to convict and sentence him accordingly. However, counsel to the defendant O.J.Akhere pleaded with the court to temper justice with mercy as his client has become remorseful for his actions.

Justice Demi-Ajayi convicted and sentenced Taiwo to Eight months imprisonment commencing from the date of his arrest.
By ABEE - March 25, 2021