The last words Nigerian record label owner uttered before his sad death have been revealed. 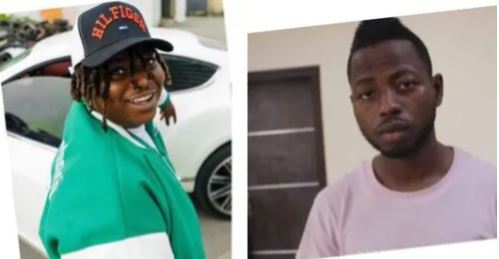 Kashy and Barry Jhay
The last words Babatunde Oyerinde Abiodun aka Kashy Godson said before his untimely death in Ghana have been made public.
Recall that the death of the founder of Cash Nation Records hit social media on Sunday with many people left in total shock.
While it has been alleged that Kashy reportedly committed suicide, his brother on his social media page claimed he was killed after a heated argument with singer Barry Jhay.
With many people calling for a thorough investigation on the death, a new video has surfaced on the internet showing Kashy’s mouth covered with blood, as he said some words that got many talking on social media.
In the video shared on twitter by a man identified as Otunba, Kashy reiterated his love for Barry Jhay even at the point of death.
The twitter user wrote: Kashy’s last words to Barry Jhay before he died: “ I love you, walahi
Meanwhile, Barry Jhay is currently in police custody in Ghana, and his arrest is connected to the death of Kashy.
Posted by ABEE at 8:54 PM