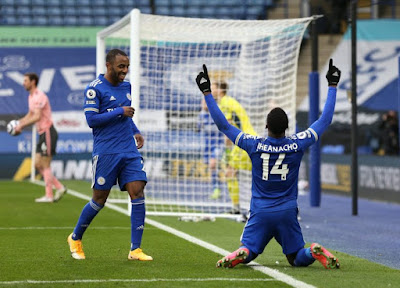 Kelechi Iheanacho scored a superb hat-trick as Leicester City maintained their push for a top-four finish with a commanding Premier League victory over Sheffield United, in the Blades’ first game since the departure of manager Chris Wilder.

Leicester were far superior at King Power Stadium on Sunday, where Iheanacho continued his fine goalscoring form as the Foxes ran riot in the second half.

Iheanacho scored for a third successive Premier League game for the first time as he met Jamie Vardy’s cut-back to break the deadlock shortly before the interval.

Ayoze Perez had come closest to an early opener with a flicked header that Aaron Ramsdale diverted onto the post, but the Spaniard got the goal his performance deserved with a fine finish into the bottom corner after 64 minutes.

Vardy thought he had ended a six-game goal drought with his shot 10 minutes from time, but Blades defender Ethan Ampadu was adjudged to have made the decisive touch.