A Nigerian man whose girlfriend rejected his marriage proposal has cried out for help. 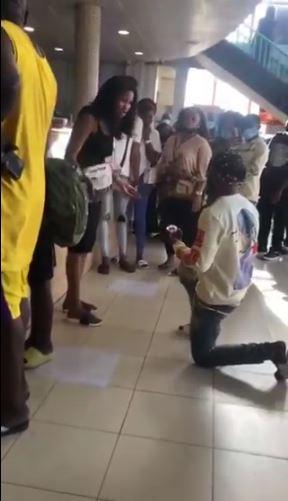 Man cries after being turned down
A man has left people shocked with his dramatic response after being rejected by his woman.
In a video footage the man could be seen crying bitterly and helplessly after a lady turned down his marriage proposal.
The man could be seen in the video on his knees begging and pleading with the lady to accept his proposal, but the lady whose mind seems to be already made up refused adamantly.
After much pleadings fell on deaf ears, people had to intervene in the matter, as they helped the embittered man up.
The man who refused to be consoled continued to cry bitterly until he finally disclosed that he exchanged his Manhood for money in a bid to satisfy the lady and meet her demands.
Watch the video below:
Posted by ABEE at 6:10 PM