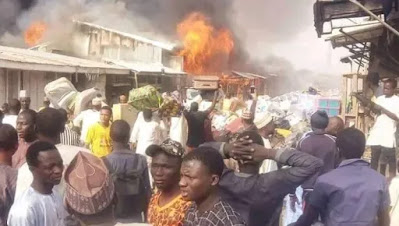 No fewer than 700 shops and stalls were razed in a Monday morning fire incident that ravaged the Katsina Central market.

It was learnt that Sabo Ungwa area, where the affected part of the market was located, had in recent times, been witnessing epileptic power supply.

Items burnt down along with the shops included household items, electronics, fabrics, food items, confectionery, and drinks, all of which are sold at the market in wholesale.

A trader, Fatimah Abdullahi, said her shop was not affected but those belonging to her other colleagues, who have travelled to Lagos and Onitsha, were affected.

She said, “A friend called us around 8am that the market was on fire. We arrived here and we tried to salvage whatever we can salvage. My shop is not affected but those that belong to my friends are affected. Unfortunately, some hoodlums, disguising as sympathisers exploited the situation to loot some of the shops. We have called those affected so that they can return home on time.”

A combination of firefighters from the federal fire service, state fire service, and from a private company as well as sympathisers assisted in putting out the fire about 11.30 a.m.

A senior police officer also confirmed the arrest of some hoodlums while carting away goods from the market.

The police officer said,” We have arrested several hoodlums who were trying to cart away some of the goods from the market and they are being detained but I cannot give you a specific number now as we are still arresting them.”