The Nigerian government has been countered by the Red Cross over its statement that it didn't see Ogun residents in Benin Republic. 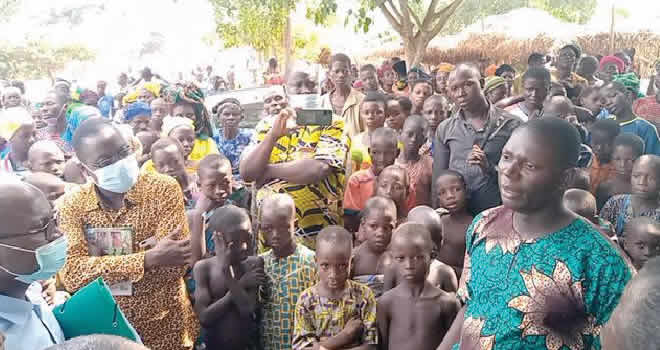 Ogun residents in Benin Republic (File photo)
The Nigerian Red Cross Society has accused the federal government of lying that Ogun residents who fled as a result of Fulani herdsmen attack are not in Benin Republic.
The Red Cross refuted the federal government's position on Friday saying that contrary to the government's claim, Ogun refugees who are victims of herdsmen attacks are still displaced in the francophone West African country.
The Ogun State Executive Branch Secretary of the humanitarian group, Oluwole Aboyade, stated this in an interview with The PUNCH.
Some residents of the Yewa area of Ogun State were recently forced to seek refuge in Benin Republic following attacks by herdsmen who invaded their villages and unleashed unprintable horror on them.
The PUNCH also visited some of the Ogun refugees in Benin Republic where they narrated their ordeal including how herdsmen burnt their children and their houses and how they had scampered for safety in the wake of the attacks.
The displaced persons are from Agbon-Ojodu, Moro, Asa, Ibeku and other villages in the Yewa Local Government Area of Ogun State.
The Nigerian Ministry of Foreign Affairs had said the Nigerian Embassy officials, who visited the communities where the people were taking shelter, were informed that they had returned to their communities in Nigeria.
The Director of Consular Department, Ministry of Foreign Affairs, Bolaji Akinremi, had said, “Our mission visited the villages mentioned and met with rulers, but was told that those who came as a result of the crisis had returned after a few days. So, no Nigerian refugee was found in Benin Republic. In line with the various media reports and the reported National Assembly directive for NEMA to bring them back home, the MFA will be willing to support as appropriate.”
But speaking in a telephone interview with our correspondent on Friday, the Red Cross official, lamented that it was unfortunate that the government was playing politics with human lives.
Aboyade, who said his team was still in Benin Republic on Saturday to distribute relief items to the Ogun refugees, said the displaced persons are still in the francophone country as of the time of filing this report.
He said, “It is just unfortunate that the government knows the truth but is trying to play politics with the human lives. Anybody can go to Benin Republic, we have been there to give them (displaced Ogun people) clothes, and other essentials.
“We have been to the palace of the king of Egelu in Benin Republic. We met with the councilors of Iganna in Benin Republic. These are the people who accommodated the refugees.
“Our Nigerian citizens are there sleeping in mosques, public areas and other places. They were displaced by Fulani herdsmen and there is no food for them and all their means of livelihood have been lost but in Benin Republic, they gave them food for a limited period of time thinking that the Nigerian government will come to their aid. But now that the government is not coming to their aid, the displaced people have no option that to go to the farms in Benin Republic for labour jobs.
“Nobody is at the villages back home; where will they go? Their houses have been razed by the Fulani herdsmen. Their means of livelihood have been destroyed. The Fulani herdsmen killed a number of the villagers, so how will those alive go back? They are not at the villages, they are in Benin Republic. The government envoy that visited the place should come and meet us and tell us that they didn’t see anybody there. The government should stop playing politics with human lives.”
By ABEE - March 19, 2021