Prophet Bushiri confirmed the sad news in a statement issued through his Facebook page on Monday morning. 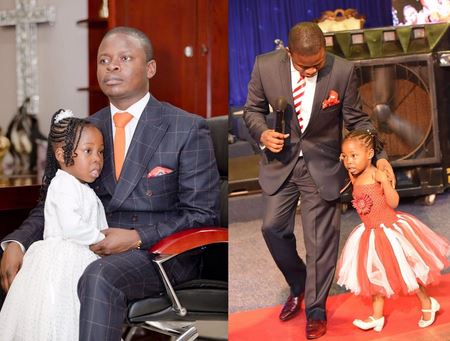 Israella Bushiri, the 8-year-old Israella died in the Intensive Care Unit of a Kenyan hospital in the early hours of Monday morning, March 29, 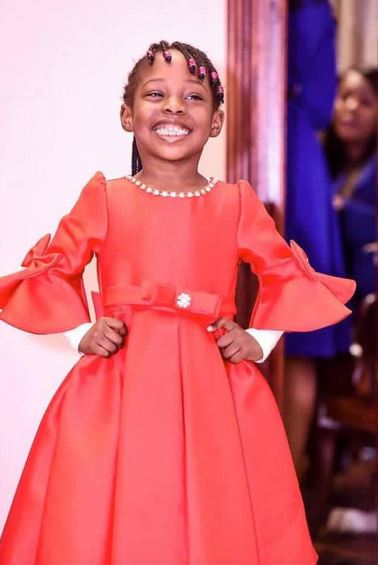 Prophet Bushiri confirmed the sad news in a statement issued through his Facebook page on Monday morning.

The embattled prophet had called an emergency prayer meeting on for his daughter saying she had been battling a lung infection for the past few weeks.

Police in Malawi recently delayed Isabella seeking medical assistance when they blocked the prophet’s children, cousin Esther Bushiri and mother-in-law Magdalena Zgambo to depart from Kamuzu International Airport in Lilongwe in a private air ambulance. They were later allowed to travel by government after a week.

In the statement, Bushiri described his daughter as a strong young girl who loved to worship and serve God, despite her young age, adding that he and his wife choose not to mourn her but to celebrate her life.

Below is the full statement from Prophet Bushiri on the passing of his daughter:

''It is with deep sadness that I announce the passing on of my daughter, Israella Bushiri.

As a Father it was my desire to see her grow and serve the Lord, however, the will of God was for her to return back to Him.

Israella was born during a time when my wife and I were going through great persecution, and she has lived her life witnessing what it means to fight and labor for the Lord despite trials and battles.

She came at a time when we really needed her and through it all, she offered my wife and I, including the entire church great comfort and enlightenment.

We are a church built on faith and if we aren’t careful to observe the ways of the Lord, we can mistake God’s will for God’s punishment.

If things could be reversed we would have desired it to be so. However, the will of the Lord is above our desires. We have experienced it and have accepted it.

Israella was a strong young girl who loved to worship and serve God, despite her young age. She was brilliant in her speech and possessed a divine excellency in the way she spoke and even tackled her studies.

Today, all those that encountered her testify that they felt a certain special aura that oozed divinity. She was a walking angel. In our darkest moments she gave us light and in our lowest moments, she lifted our spirits. I am grateful to God to have fathered an angel of such spirit and beauty. She will always be my little girl.

When I spoke to the Doctor, he highlighted that if she had not been blocked at the airport the first time she needed to travel to Kenya for medical assistance, she wouldn’t have passed on.

It is very disheartening and sad, therefore, that my daughter has become a victim of the persecutions that we are facing from South Africa.

However, my wife and I, bow to God’s sovereignty and as this is his will, it could have happened anyway.

Today, my wife and I choose not to mourn her but to celebrate her life. I do not believe that the devil could take the life of my daughter.

She was a child of God and she passed on to be with Him according to His will. We prayed and we fasted, we commanded out- and in this week, when the Lord spoke to me that it will be a week of His will- His will has taken place.

Family, join me, not in mourning as those without hope but in celebrating the life of Saint Israella. She shall always be remembered and forever carried in our hearts.

1 Thessalonians 4:13, “Brothers and sisters, we do not want you to be uninformed about those who sleep in death, so that you do not grieve like the rest of mankind, who have no hope.”

I will be addressing the general public at exactly 12.00 hrs (CAT) on ALL our official social media platforms as well as Prophetic Channel. 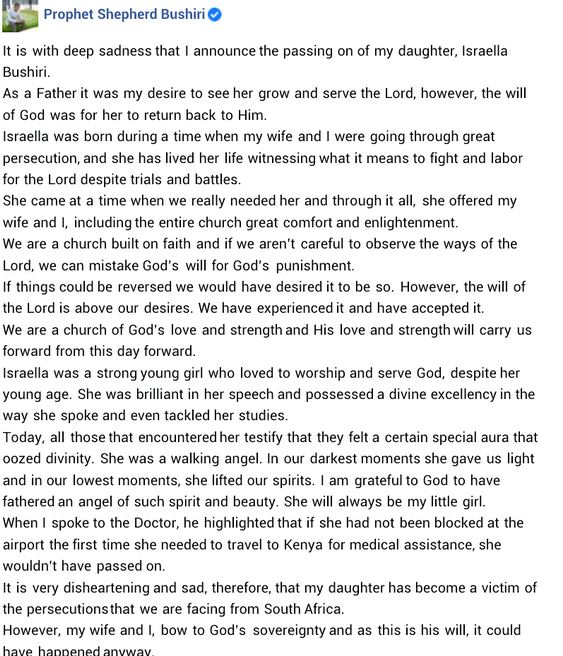 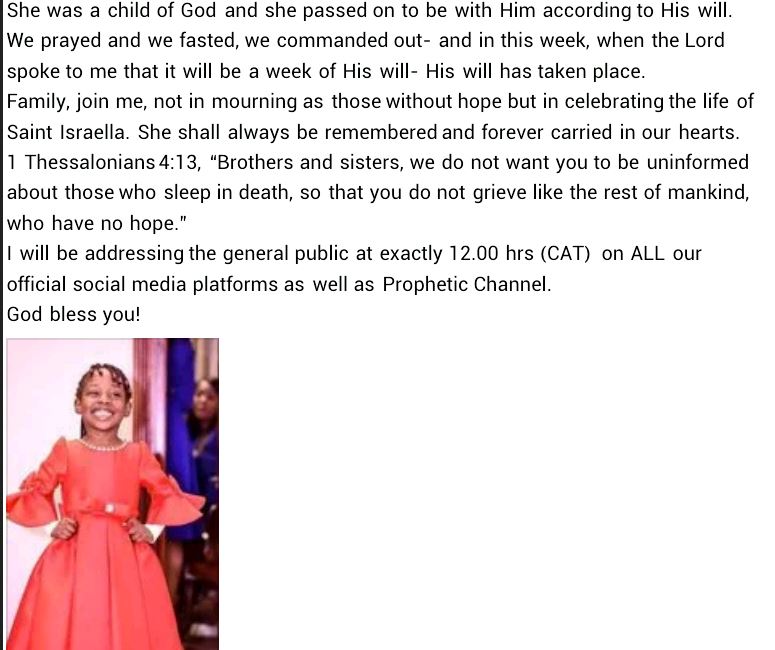 daughter of Prophet Shepherd Bushiri, pastor of the Enlightened Christian Gathering (ECG) leader, has lost her life after a battle with  lung infection.