The FG urged the NSCDC to work in synergy with other security agencies to immediately restore peace and security in the country, particularly within the school environment. 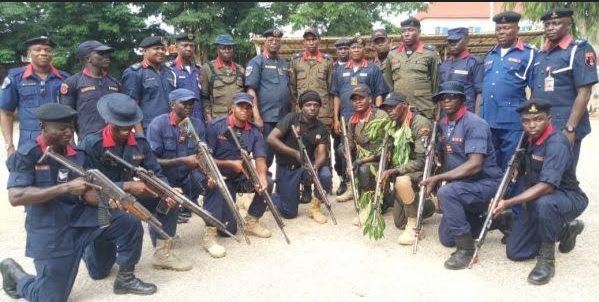 Following the incessant abduction of school students by bandits, the federal government has tasked the Nigerian Security and Civil Defence Corps to work with security operatives to protect schools across the country.

This, it said, was born out of its resolve to ensure children’s safety everywhere, especially within the school environment, from kidnappers and armed men.

The Director of Press and Public Relations in the Ministry of Interior, Mohammed Manga, said in a statement on Monday in Abuja on behalf of the Minister of Interior, Rauf Aregbeshola.

According to the statement, Aregbesola gave the charge when he decorated Ahmed Audi as the new commandant-general of the NSCDC.

It said, “Children are a specially protected social category. They are innocent and, at the same time, vulnerable. They are as vulnerable to external circumstances as to their own wiles.”

According to the statement, Aregbesola expressed sadness over the spate of kidnappings of students.

He, however, urged the NSCDC to continue to work in synergy with other security agencies to immediately restore peace and security in the country, particularly within the school environment.

The minister reminded the new NSCDC boss that he was mounting the organisation’s saddle at a critical time.

“It is going to be rough but that, as a motivational speaker once wrote, it is great challenges that produce heroes and men of history,” the statement added.

He also tasked the corps to develop a robust scheme that would check the menace in the schools and ensure the protection of critical national assets such as oil pipelines.

“Another scheme, like the Agro Rangers, should also be developed to cover full agriculture and offer protection to all categories of farmers.

“Protecting crop farmers and pastoralists is a matter of national food security,” he added.