A controversial bill that would have given jumbo pension to ex-governors, deputies and their spouses has been stepped down. 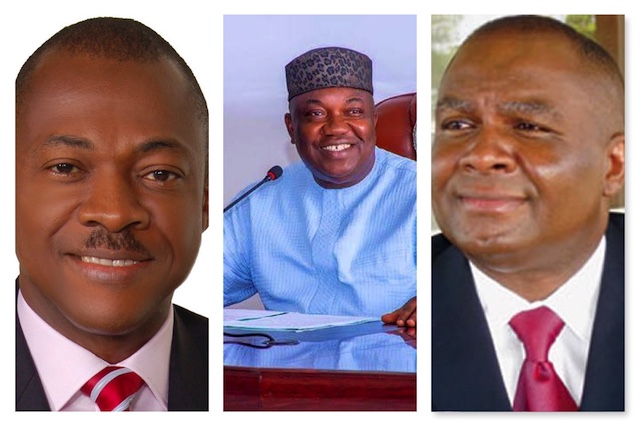 Ex-Enugu Governors
Following public outcry, the Enugu State House of Assembly has suspended a pension bill for exgovernors, deputies and their spouses.
The Bill seeks to appropriate at least 900 per cent of a governor’s annual salary as his monetary entitlements every year after leaving office.
The wife of the governor would also have gotten N12 million as annual medical allowances provided she was married to the governor while in office.
Apart from the N12 million provided for a former governor’s wife as annual medical allowance, both ex-governor and ex-first lady will also receive free medical services until death.
The Bill guarantees to cover almost any possible major expenses an ex-governor could incur in his or her life, including financial responsibility for burial.
Its Section six states: “where a former governor or former deputy dies, the state government shall make adequate arrangement and bear the financial responsibility for his burial.
“It shall also pay a condolence allowance of a sum equivalent to the annual basic salary of the incumbent to the next of kin.’’
Section Four provides for “such other gratuity or allowances as may be provided by any other law” as may be entitled to a former governor other than what was stated in the Bill.
In addition to the lifetime annual basic salary (ABS) for an ex-governor, there is also a house maintenance allowance, an annual salary for five domestic staff and a vehicle allowance, each valued at 300 per cent of the ABS.
It provides three vehicles for the ex-governor to be replaced every four years as well as a personal assistant on salary Grade level 14.
There are also similar provisions for former deputy governor who get 200 per cent of their ABS each for house allowance, vehicle allowance and annual salary for three domestic staff.
The former deputy governor will also get two vehicles to be replaced every four years, free medical services for him and his wife as well as N6 million medical allowance for the latter.
Enugu State was only able to generate N12.2 billion as revenue in the first half of 2020.
Soon as the Bill passed through the first reading at the House of Assembly last Thursday, the Save Enugu Group (SEG) a socio-political group issued a 21-day ultimatum to the State House of Assembly to kill it.
Its National Coordinator, Chief Willy Ezugwu, said in a statement that the lawmakers must kill the Bill immediately for peace and tranquillity in the state’s political arena to be sustained.
He stated that SEG was already mobilising “conscious citizens, civil society groups and labour unions in the state to shut down Enugu State House of Assembly for as long as it will take to kill the most insensitive Bill’’.
“It is shocking that while a state like Lagos, with high internally generated revenue that runs into billions of naira monthly, has abolished pensions for former governors, the Enugu State House of Assembly allowed such a Bill to pass first reading,’’ Ezugwu added.
Other stakeholders in the state shared the views of the SEG and called for the killing of the Bill.
At plenary session on Tuesday, Speaker of the House, Chief Edward Ubosi, said the Bill was not the making of the seventh Assembly but had existed since 2007, adding that the 1999 Constitution as amended, gave backing for such legislation.
Ubosi said the stepping down of the Bill would help his colleagues to thoroughly go through it to enable them to delete as well as add necessary sections to it.
According to the speaker, the public should have allowed the lawmakers to study the Bill, which just passed through the first reading last Thursday.
He noted that former governors serving as senators would not benefit from the pension scheme, while the spouse of the former governors would also not benefit from the scheme since the Constitution did not recognise the spouses.
Earlier, the Leader of the Assembly, Mr Ikechukwu Ezeugwu, expressed shock at the level of protest that followed the presentation of the Bill, which he said was not necessary.
The leader said that the public could not dictate nor teach the lawmakers how to do their job of enacting laws for the growth and development of the state and warned members of the public to mind their utterances.
Ezeugwu noted, however, that the Assembly would be guided by the opinions of their constituents in the consideration of the Bill and added that it would hold a public hearing to allow members of the public to make their inputs.
He maintained that the seventh Assembly was “not a rubber stamp’’.
Ezeugwu stressed that the lawmakers were also not elected by their constituents just to be collecting salaries and other allowances without making laws that would better the lot of Enugu State
By ABEE - March 16, 2021