The fuel queues have worsened since Friday following the shutdown of many filling stations amid heightened expectations of an increase in the pump price of the product. 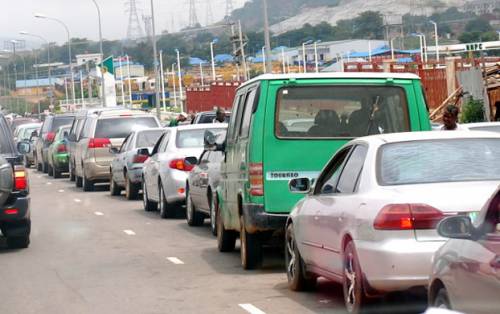 According to a report by SaharaReporters, some black marketers have hit major roads in the Federal Capital Territory, Abuja, taking advantage of the biting fuel scarcity to sell a litre of fuel beginning from N400.

SaharaReporters observed that the black marketers operate in densely populated areas such as Kubwa, Mpape, Gwarinpa, Nyanya, Asokoro, and up to Lugbe and Gwagwalada, mostly in the early mornings and evenings, selling adulterated fuel to desperate buyers.

The fuel queues have worsened since Friday following the shutdown of many filling stations amid heightened expectations of an increase in the pump price of the product.

Some motorists told SaharaReporters how the situation forced them to patronise black marketers.

“The fuel scarcity in Abuja is worse than I imagined it. Every filling station is either locked or has an embarrassing queue. But black marketers are all over on every major road. They sell for N400 per litre. I bought 15 litres for N6, 000 yesterday,” a motorist, Kazeem Ibrahim, said.

“Yesterday, I bought 10 litres of fuel for N4, 000. I have yet to reconcile my purse with that. With the unending queues at filling stations, I had to fill my tank. With the queues along the roads also came traffic congestion and even gridlock in most areas. So, you still waste the fuel on useless traffic snarls,” another motorist, Mrs Hassana Ahmed, lamented.

“There are long fuel queues everywhere, starting as early as 6 am to cause traffic congestions along single lanes. Nobody is protesting. Where are the officials of the Nigeria Labour Congress, and the #EndSARS protesters? It seems we have normalised suffering in Nigeria,” another aggrieved motorist said.

“I set out this morning at 5 am to buy fuel, and I moved around the city. Contrary to reports, I discovered there is no fuel scarcity in Abuja, but fuel has finished in Abuja. If you like, queue from 2 am till 1 pm, you won't get fuel to buy,” a commentator on Twitter observed.

SaharaReporters had on Monday reported that fuel queues resurfaced on Saturday and Sunday, as only a few filling stations were dispensing petrol while others were shut.

Some attendants at some of the shut outlets explained that they were not selling petrol because the cost of the product would be increased from March.

Nipco and Gegu filling stations, along the Kubwa-Zuba Expressway, Abuja, had long queues of motorists on Sunday, while IBWAS filling station on the same road, which had earlier dispensed petroleum products, was shut.

Similarly, Major Oil filling station, along Airport Road, Abuja, which had steadily dispensed fuel up till Saturday, did not sell petrol on Sunday.

Shema Oil, close to Next Cash ‘N’ Carry in Abuja; NNPC outlet in Zuba, Niger State, and few other filling stations in Nyanya/Mararaba in Nasarawa State had queues.

“We have not been advised of any increase in petrol price. Many filling stations are not selling petrol perhaps because they have run out of stock or they are hoarding the product in anticipation of price increase,” the National Operation Controller, Independent Petroleum Marketers Association of Nigeria, Mr Mike Osatuyi, had said.

“The outcome of the meeting between the President and the governors is not yet known. There will certainly be an increase in petrol price but we don’t know when this will happen,” he had added.