According to the army on Saturday, the troops engaged and killed the insurgents, recovering seven AK-47 rifles from them and freeing three kidnapped victims. 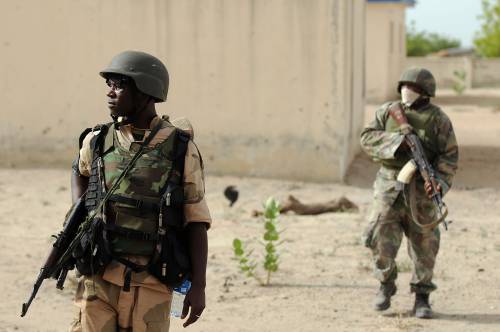 According to SaharaReporters, the very dangerous Boko Haram terrorists have engaged the troops of the Nigerian Army deployed on Operation Lafiya Dole in a gun battle.

The terrorists engaged the army in a battle in Askira and Chibok towns, during which 48 terrorists were shot dead, while 11 victims were rescued from the insurgents.

It is not clear yet if any of the troops were casualties.

The troops of the 28 Task Force Brigade of Sector 1 Operation Lafiya Dole in Chibok town encountered scores of the Boko Haram terrorists in an ambush along the Chibok - Damboa axis of Borno State.

According to the army on Saturday, the troops engaged and killed the insurgents, recovering seven AK-47 rifles from them and freeing three kidnapped victims.

SaharaReporters learnt that the gun battle is ongoing as troops and the terrorists lay ambush for each other for further exploitations.

“The troops are presently dominating the area with aggressive patrols and are equally on a trail of fleeing terrorists in order to locate and neutralise them.

“The Chief of Army Staff, Lt Gen Ibrahim Attahiru, has urged them to remain dogged and maintain their offensive posture in all operations until the area is rid of all remnants of terrorists.

“He equally appreciated members of the public for their continuous support to the troops and enjoined them to continue to provide credible information to the troops and other security agencies operating within their localities,” the Director of Army Public Relations, Brig Gen Mohammed Yerima, said in a statement.