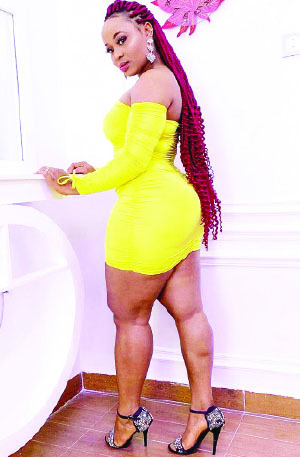 ﻿Inem Peter, the beautiful Nollywood actress, who is well known for posting raucous photos on Instagram, has said she is heartbroken.

Hear her: “My relationship has ended and I am single again. It ended because we were too calm. He wanted noise in the relationship. I mean he likes a girl who quarrels and fights. But I can’t trade my peace of mind for any relationship.

“Sometime ago, I gave a thought to marrying one of my colleagues, but coming this far in the industry, I can’t think of settling down with an actor. It is a ‘no’ for me. The very handsome ones that I would have considered are too talented that you can’t tell when they are acting or being real with you. Regardless, I’m am definitely giving marriage a chance soon. I pray it happens this year. Fingers are crossed.”

On the kind of man she would love to settle down with, the For My Eyes Only producer says, “I like tall and humble guys. He has to be a giver too. Then sex is very important. He must be impressive in bed. Stingy, deceitful and selfish guys turn me off, likewise bad sex. I can’t stand bad sex. On the contrary, a good sense of humour is a turn on for me, not sarcasm though. Also, be truthful to me no matter how hard it is.”