A Policeman Threatened To Kill Me, Gave Me 7 Days To Pray - Nigerian Comedian Cries Out

He also said the operative gave him seven days to pray as he was hell-bent on killing him when he called him on a WhatsApp video call. 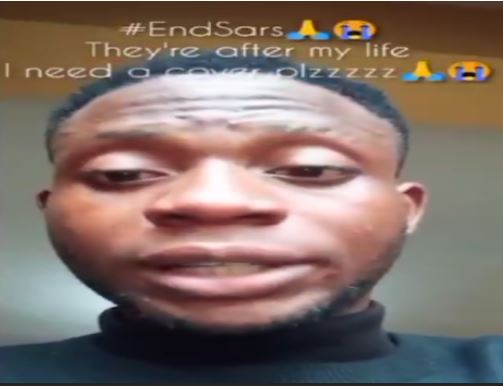 Graciox Talker, an up-and-coming comedian, has cried out that an operative of the defunct Federal Special Anti-Robbery Squad threatened to kill him.

Talker alleged this in a video posted on his Twitter handle Graciox_Talker @GracioxT on Wednesday.

He also said the operative gave him seven days to pray as he was hell-bent on killing him when he called him on a WhatsApp video call.

In the video, Talker begged Nigerians to help save his life from the security agent, whom he said showed him an AK-47.

“Good evening, everyone watching this video clip. I’m Gracioux Talker, I’m a comedian. This is to use this medium and opportunity to tell you that this is not a comedy skit. This is about my life,” Talker said.

“My life is at risk in the hands of someone I don’t know fully well. He’s a member of Federal SARS. This guy called me yesterday on a video call on WhatsApp. He showed me an AK-47 gun and told me to keep on praying that my time starts now, that in a week’s time, he is going to be done with me.

“I don’t know what I have done to this guy. This guy is after my life and my dreams. I’m begging because of my purpose in life. Please, save my life.”

The comedian displayed the screenshots of the number, the face of his tormentor, and the name that appeared with the number was +234 813 525 579.

In his post, he also tagged a human rights activist, Segun Awosanya @segalink, ace comedian, Mr Macaroni @mrmacaroni, among others.