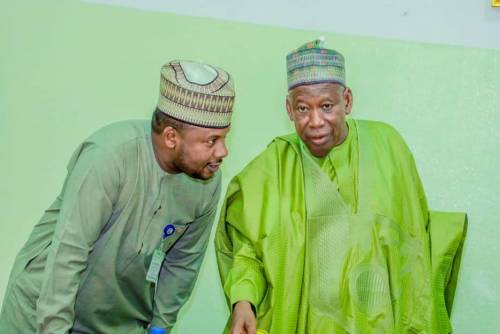 Nigerias number one man, President Muhammadu Buhari’s government has been accused of denying Nigerians the right to freedom of speech concerning matters affecting the nation.

Some Nigerians on social media made the accusation following the arrest of an aide to Kano State Governor, Abdullahi Ganduje, Salihu Tanko Yakasai.

Alhaji Tanko Yakasai, father to Salihu Tanko had claimed that his son was arrested for calling for the resignation of President Muhammadu Buhari over the abduction of the students of the Government Girls’ Secondary School in Jangebe, Talata Mafara Local Government Area of Zamfara State.

But operatives of the Department of State Service, DSS in Kano state denied his arrest.

Yakasai, who is yet to be seen has also been sacked over his continued comments and utterances which are deemed contrary to the stand of the ruling All Progressives Congress, APC which he is serving.

The development has now attracted condemnation from Nigerians who called out Buhari-led government for hindering free speech.

@DrOlufunmilayo “Dawisu has committed no crime. Dawisu has done nothing wrong. To wake up this morning and hear of his arrest by a government and party that he works for is absolutely disgusting. His arrest is a shame to the APC and to the Kano State government he works for.”

@Mabba “Telling the truth in Nigeria is now a crime.

Dawisu admitted it that APC government has failed in protecting lives and property and unfortunately got missing.”

@JaafraSjaafar “The SSS has denied arresting Dawisu! The Kano State director of the service told me “it’s a rumour”. Isn’t this reminiscent of Dadiyata’s mysterious disappearance?

@Omojuwa ” Dawisu criticised his own party, disappeared and we thought he had been killed or kidnapped. That reminds me of Hitler, not justice. That’s the game under fascism, not democracy. If you support this, keep it going. You will live long to enjoy it too.”

@Gimbakakanda “The resources that ought to be disbursed for tackling burning national issues like banditry has unfortunately been wasted in abducting Dawisu in Kano and transporting him to Abuja. For what, I ask? What’s this madness for God’s sake? To intimidate government critics?

@El_uthman “If a government Aide like Dawisu can be arrested only because he said their government has failed in protecting the lives of the citizens then no one is in position to tell this people the truth anymore I think. What a government .”

@Mufeeda “Dawisu did nothing but exercise his fundamental human right which has been given to him by the constitution and justiciable in any court of law to international levels.The arewa youth might not be strong but we won’t keep quiet for this.Dawisu did nothing.”

@Mfarees ”A bandit who kills and kidnaps people is being called for negotiation and given hundreds of millions, but Dawisu who criticizes those bandits and calls on government to save its citizens’ lives is being held at the DSS office, for what exactly I don’t know! #FreeDawisu NOW!

@Ayemojubar “Somto was arrested and released yesterday, An attempt was made to arrest Sunday Igboho yesterday. Dawisu who has been supporting Buhari since 2011 was also arrested yesterday. Same day that 317 students were abducted by bandits and till now no trace.”
Posted by ABEE at 7:24 AM