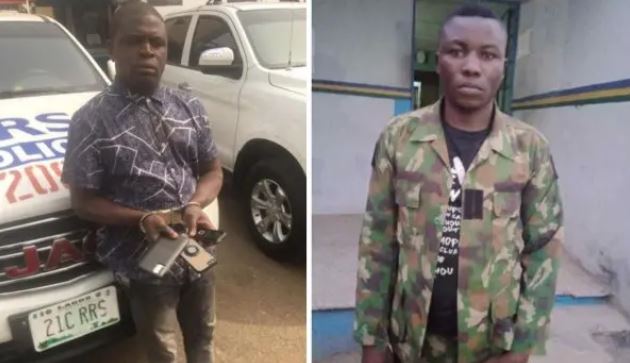 A man who pickpockets alongside a dismissed soldier who dispossess unsuspecting individuals of their belongings met their waterloo as they were both arrested by officers of the Lagos state Police Command.

According to reports, the 27-year-old pickpocket identified as Ayomide Sikiru disclosed that he had stolen 240 mobile phones from commuters in Lagos, since he started operation one year and two months ago.

The dismissed soldier was however arrested in another operation while he was in the company of an accomplice, robbing residents of the Aguda Axis of Lagos.

The pickpocket, Ayomide Sikiru, 27, a resident of Akala, Mushin, was arrested around 10:00 p.m on Sunday, after he successfully picked a Tecno Camon 12 from the hand bag of an elderly woman when she was trying to board a commercial bus to Ojodu-Berger, Lagos.

Sikiru, who disclosed that it took him 15 days to learn the criminal act, revealed that he operated between Thursdays and Saturdays only.

Luck however ran against him after he was confronted by the owner of the phone.

During interrogation, he said:

“I live in Akala, Mushin. I don’t use charm. Someone taught me how to pickpocket. I followed him out for 15 days and watched how he did it until I became perfect. I only operated at night, sometimes when passengers were sleeping inside the bus or rushing to board a commercial bus. I have so far stolen 240 phones. I sell them to ready buyers”.

The Lagos State Police Public Relations Officer, CSP Olumuyiwa Adejobi , who confirmed the arrest, said phones had been handed over to their owners.