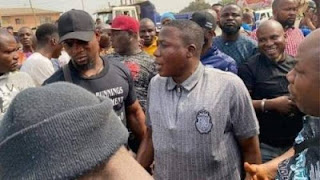 On Wednesday, Igboho's supporters set up a Gofundme page for the purpose of raising £100,000 (N51.8m) for him to buy buses to help in the movement of his men in a bid to rid the Yoruba land of killer herdsmen.

The fundraiser, which was initiated by Maureen Badejo, a blogger and activist based in the United Kingdom, has so far garnered £14, 824 (7.6m) with over 446 donations made.

But the singer’s daughter who is a lawyer urged Nigerians to desist from raising money for Igboho.

According to her, Igboho was an active participant in the last Ife-Modakeke crisis, where lots of lives were lost.

The lawyer wrote, “Anybody donating money from any part of the world in order to set Nigeria on fire will never know peace. It took us a lot to get here, please don’t take us back, don’t kill my dreams because of your own ignorance. Every media establishment that repeatedly calls Sunday Igboho a ‘Yoruba activist’ is playing its part to cause ethnic crises in the South-West in order to extract political value from it. Every one of them.

“I am 100 per cent Yoruba but I will never support anyone that wants to cause war, the Igbo man is my brother, the Hausa man is my brother too. As a student of history, I know the cost of the last Ife-Modakeke crisis, where this Sunday Igboho was said to be an active participant. All those interviewing him and amplifying the war he is calling for should be subjects of interest to the DSS (Department of State Services) – if the DSS still knows its duties. In my life, I do not support nonsense, go and read section 43 of the 1999 constitution. One Nigeria, the whole country belongs to all of us.”