How We Posed As Women On Online Dating Sites To Rob, Kill Our Victims — Suspects Make Stunning Confession 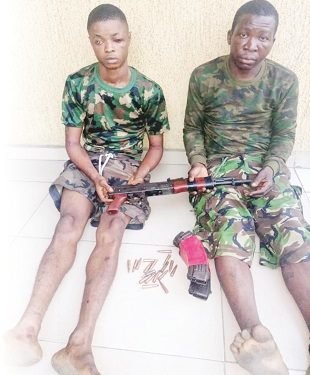 The Nation reports that a suspected five-man gang of kidnappers, including a lady, has arrested.

The gang was smashed by operatives of the Force Intelligence Bureau Response Team (FIBRT) led by a Deputy Commissioner of Police (DCP), Abba Kyari.

The suspects have also given details of how they lured men through a popular online dating website known as Tinder to lonely spots where they attack and rob them of their valuables. The less fortunate among their victims, they said, were killed by being strangled or shot.

Their arrest came on the heel of a petition filed to Kyari by the family of one of the victims, Michaels Victor.

According to a police source, on 12th January, 2021, the family of the now deceased Victor had reported to the Intelligence Response Team (IRT) that their son had been missing since 6th January, 2021. With the help of intelligence gathering and support from the Technical Intelligence Unit, Force Headquarters Abuja, one of the suspects identified as  Eneji Michael a.k.a. General was arrested with two other accomplices. Police also recovered one AK-47 rifle and three magazines loaded with 18 rounds of ammunition.

The source further revealed that during interrogation, the suspects confessed to having killed the victim the very day they kidnapped him. They later led the operatives to a forest around Old Onne Road where they usually carried out their kidnapping and armed robbery operations.

On getting to the forest, it was discovered that the Divisional Police Officer In-charge of the jurisdiction, Chukwuma Emeka, a Superintendent of Police, had already recovered the corpse and deposited same in the mortuary at Okirika General Hospital.

The DPO was said to have received information on January7 that the body of an unknown person was lying on Old Onne Road, between Nyelek Filling Station and Grabek Kitchen/Bar Trailer Park.

Some inhabitants of Eleme/Onne had narrated how hoodlums turned their forest into a terror zone, especially the spot where the young man was killed, thanking IRT for coming to their rescue.

The alleged leader of the gang, Michael Eneji, who described himself as a native of Gakem community in Bekwara Local Government Area of Cross River State, narrated  how he had  been taking part in kidnapping and armed robbery  since 2011.

Eneji said: “I have been involved in kidnapping and armed robbery since 2011 when  I got my B.Sc in Business Administration. I have been operating under the guise of a naval officer.

“I used to tell people that I was a naval personnel because they used to see me wearing Navy uniform all the time.

“In 2011, I was arrested by the Department State Services (DSS) and was charged to court in a case involving receipt of a stolen phone. I was later released from court.

“In 2014, I was arrested by the Anti-kidnapping Unit in Rivers State and charged to court for the kidnapping and murder of Shola Olaseinde and Mr. Progress Benin Disi, a staffer of Shell Oil Services Company. I was also released by a high court judge after I had served six months in prison.”

Asked about their mode of operation, he said:

“We normally pose as women on most of these dating sites. As soon as we lure our victim, we would arrange a meeting. If the target proved stubborn, we would bring in the lady among us to speak with him.

“If the man still insists on seeing the face of the lady, we would go on video chat. We also used a small Tecno phone that enabled us to change our voice from a man’s voice to a woman’s, just to deceive the victim.

“Once I had established a contact, I would move to the next stage, which was to convince the victim that I would satisfy his sexual urge.

“Pretending to be a girl, I would tell him to meet me at Conoil Filling Station or Nyelek Filling Station, before the trailer park on Eleme Road while one of my boys, Success, would go there and meet him, disguising as my domestic servant and directing him to my house.

“To further convince him to come, I would claim that I lived in a secluded mansion where I would not be disturbed by anyone.

“On his way to my ‘house’, Success would tell him to drive towards a deserted place where we would he laid an ambush.

“Dressed in army uniform, we would stop them, overpower the man and tie his hands and legs while we take his valuable items such ATM cards.

“It was the work of Abubakar and Otuma to tie the victim while Emeka would hold the AK-47 in case of any attack. I would then go to the Bank to withdraw whatever the victim had in his bank accounts.”

Explaining his foray into crime, Eneji, a father of two and an indigene of Cross River State, said: “After secondary school, I was admitted into Cross River University of Technology where I studied Business Administration. I worked with Crone Consulting Company for about a year before I voluntarily resigned and decided to hustle on my own.

“Sometime in 2014, I met some friends who introduced me to online dating fraud. We would download pictures of beautiful women and used them to woo men. We had a girl on standby who would respond to them if they requested for video call.

“We operated for years until one of our victims died. He was struggling to escape and we had no choice but to kill him and the police were able to track us down.

I and several others were arrested and charged to court. I was sent to prison but our lawyer was smart enough and got us released in 2015 after eight months in prison. He told us that the judge struck out the case. We only appeared in court three times and pleaded not guilty.

“I relocated to Ibadan but did not spend much time there because my cousin saw me as a burden, so I went back to our family house in Eleme. I tried my hands on different businesses and the money I made was used to rent a big house where I started rearing dogs.

“I tried my best to stay away from crime until October last year when I met Abubakar Sadiq. I knew him in those days as a fraudster, and he brought up the same business idea that landed me in prison.

“I was broke and needed money, so I decided to help Abubakar. My job was to snatch ATM cards and use them to withdraw money from the accounts of the victims.

“The lady who worked for us is known as Joy. Her role was to pretend to be a single but rich woman who works in an oil company.

“She would invite our victim to her house along Airport Road in Igwuruta-ali. As soon as the victim got close, he would be abducted and dragged into the bush where he would be detained till every kobo in his account was withdrawn.

“I was waiting for the password when Abubakar called and told me that the man was dead. We all went home and two days later, the police arrested me.”

In his own confession, Success Chudi Okeke (26) said he hails from Anambra State and read Microbiology at Covenant Polytechnic, Aba, Abia State.

He said: “I met Michael so many years ago, and sometime last year I visited his house at Igwurita-ali and begged him to show me the way to make money. He told me that online dating was the way out.

“Initially, I did not want to join them but things were hard for me after graduation. I am the first son and I wanted my parents and other sibling to see me as someone who doing well. My plan was to make some money and relocate to Lagos.

“He told me that my job is to go and pick our victims and bring them to an agreed spot.

They did not tell me that our last victim died until the police arrested me. It was at the police station that I identified him through the clothe he wore on that day.

“On the agreed date, Michael gave me his number and asked me to pick him. I called and told him that my madam who worked in an oil company requested that I should  bring him to the house. I picked him at a bus stop near Conoil on Refinery Road.

On our way, we passed through the agreed spot and our gang members dressed in military uniforms stopped us. It was around 8 pm. They asked why we were passing through there and pretended to be searching us. Then they overpowered the man and dragged him into the bush.

“I was waiting for them to collect his ATM card and password when I saw flash lights from real security men on patrol. I ran away and later called Michael who told me to go home and wait  till further notice. I was actually waiting when policemen arrested me.

Another suspected member of the gang, Emeka Nwachukwu (22) said: “I am not part of their Online dating fraud business. I was arrested because police saw an AK47 in my room. It was given to me by boss, Ojieme, who is a militant and a cultist. He is one of those who provide security during campaigns.

“It was one of these days that I went to watch them and, unfortunately, I was grabbed by some boys and forced to become a cultist. Once they initiate you, anything you are asked to do, you must comply or they punish you the way you will live to regret.

“He taught me armed robbery and I have joined him several times to rob houses in my community, Igwurita-ali. The highest amount I made from robbery operations has never exceeded N40,000.

“I knew Micheal (Eneji) as a naval officer in my community, and everyone respected him. If you had a problem, he would come and help you to sort it out with the police or any security agency.  “During my grandfather’s burial, I contacted him to provide security. I gave him that AK47 because they did not have enough weapons. After the event, he gave it back to me.

Eneji confessed that the gang had fleeced so many men before they were arrested by men of the Intelligence Response Team. He recalled that while some of the victims survived the attacks, others did not.

Advising would be criminals, he said: “I hope Nigerians will understand and realise the pros and cons of electronic dating to reduce such dangerous crimes.