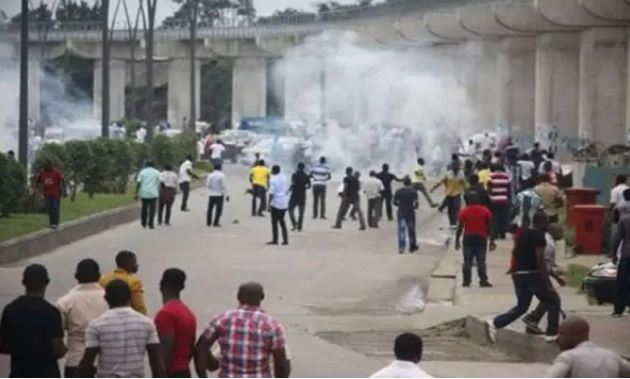 Following the on-going cult clash between rival cult groups in Obun-Ale, Ireshe, Ladega, Itunpate, Kokoro-Abu and Adamo areas of Ikorodu, Lagos, many lives have been lost.

According to the Lagos State Police Command, four people have already been arrested in connection with the clashes between suspected members of the Aiye and Eiye confraternities.

PUNCH Metro gathered that clashes started on Sunday, with 14 persons feared dead as of Tuesday.

An eyewitness, Farouk Aderibigbe, reported that the clash started when suspected members of the Aiye Confraternity shot dead four persons, including an innocent motorcyclist, identified simply as Pastor, around Ireshe and Obun-Ale on Sunday.

“Cultists have scattered everywhere in Ikorodu; members of the Eiye and Aiye groups have started clashing again and a lot of people, including innocent residents, have been killed. Around 7pm on Sunday, members of the Aiye Confraternity stormed the Obun-Ale area and shot three Eiye cultists dead; two others, who were also shot in the neck, were rushed to the Ikorodu General Hospital, but we don’t know if they survived.

“Also in the night, a motorcyclist’s dead body was seen opposite Oriwu Merchant, along the Ireshe Road. The victim’s motorcycle was found beside him. We gathered that the cultists, who invaded Obun-Ale, were fleeing on motorcycles when one of their motorcycles stopped abruptly. Pastor was riding his motorcycle to a destination in the area when the cultists waylaid him and shot him dead.”

Another eyewitness, Oke Fakunle, said during a reprisal on Monday, suspected members of the Eiye Confraternity allegedly shot two rival members dead, adding that a yet-to-be-identified businessman was also killed while resisting the cultists from looting his shop.

“Around 11am on Monday, members of the Eiye Confraternity retaliated by shooting an Aiye member, Ola, to death at his barbershop on Idera Street in Itunpate. Around 1pm, they proceeded to the Kokoro-Abu area, where they apprehended another rival member, stripped him naked and shot him in the head in broad daylight. Not done, the Eiye members later went to the Ladega area and shot a businessman dead during an attempt to rob him at his shop.”

The clashes took another dimension on Tuesday, when seven persons, who were said to be innocent, were shot dead by suspected members of the Aiye Confraternity, who invaded the Adamo area of Ikorodu.
By ABEE - January 14, 2021