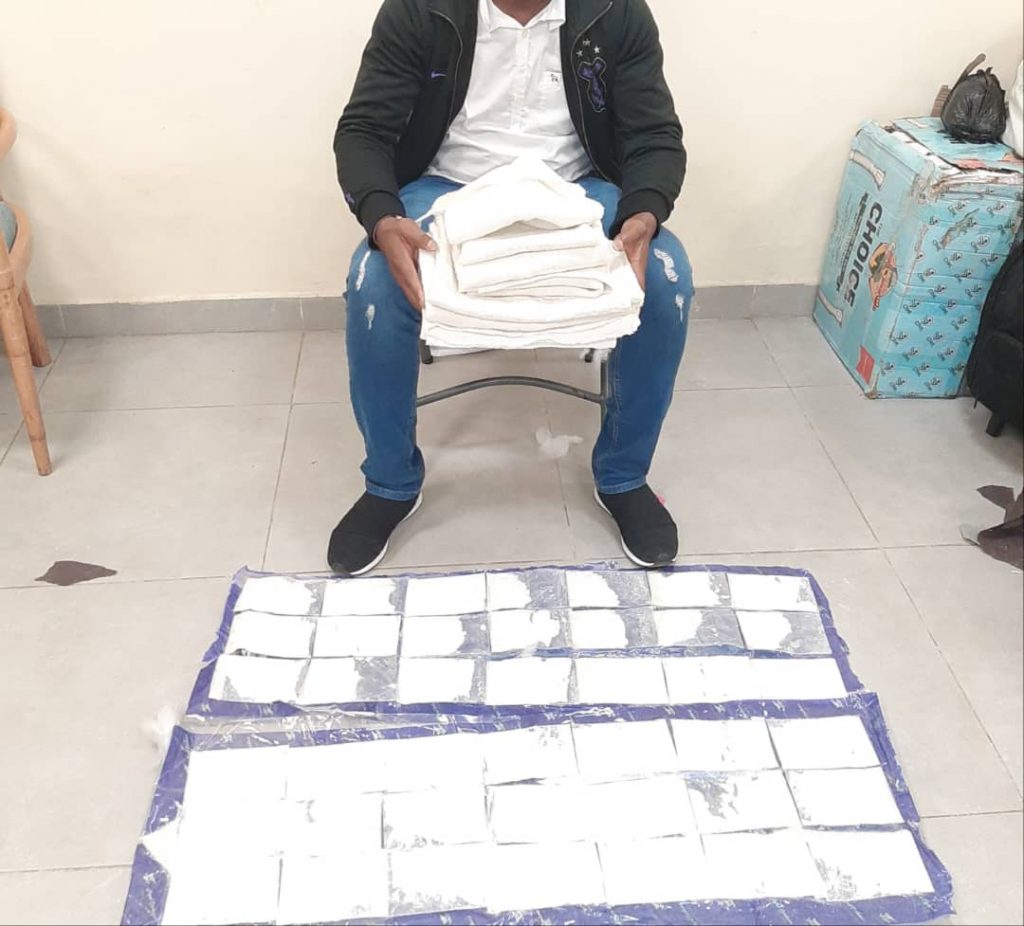 Operatives of the National Drug Law Enforcement Agency, NDLEA have apprehended three persons with cocaine at the Murtala Muhammed International Airport (MMIA), Lagos.
The suspects, it was gathered were arrested with 137.8 kilograms of cocaine on January 6 and 8, 2021 with the illicit drugs hidden inside hair relaxers, embroidery tailoring materials and shirts packaged with carbon and other oily substances to avoid being detected by the scanning machines.
The suspected drug traffickers whose names were given as Okeke Uchenna and Azubuike Jeremiah Emeka were nabbed by officials of the agency during inward clearance of Ethiopian airlines from Brazil while Abdul Musa a freight forwarder was nabbed while trying to export Cocaine to India through the cargo warehouse of the Skyway Aviation Handling Company, SAHCO in Lagos.
According to the NDLEA Airport Commander, Garba Ahmadu, at a news briefing held Tuesday, the suspects were arrested with 13kg, 117kg and 7.8kg of cocaine.
Ahmadu stated that Okeke Uchenna was a second time offender and a fugitive wanted by the Federal High Court Lagos for jumping bail for a drug related offence in 2014, adding a bench warrant had been issued for his arrest.
He described the seizures as significant because of the quantity of the drugs seized
In 2020, the NDLEA Lagos airport commander said, the Command made a total seizure of 3413.463 kilograms of illicit drugs comprising cocaine, methamphetamine, cannabis sativa, just leaves, ephedrine and psychotropic substances.
A total of 60 suspects were arrested comprising 52 males and 8 females and were all charged to court and arraigned for prosecution and 44 were convicted.
“The breakdown of drugs seized are Cocaine 51.404(1.51 per cent), Cannabis sativa 103.84(3.04 per cent), Methamphetamine 19.935(0.58 per cent), Ephedrine 19.811(0.58 per cent), Khat leaves 2993.350(87.70 per cent), Psychotropic substances, Tramadol 158.632(4.65 per cent), Diazepam 42.0(1.32 per cent) and Nitrazepam 24.491(0.72 per cent), bringing the total drug seized to 3413.463(100 per cent)”.
Mr. Ahmadu noted that the successes were achieved through the selfless sacrifice exhibited by the officers and men of the Command even in the face of serious dangers and challenges.
” I want to thank the Management of the NDLEA for leading the Command and partnering with the UK border force, British National Crime Agency which paved the way for the creation of Joint Border Task Force Project (JBTF).
The project was responsible for the transformation of the NDLEA MMIA command into a model office equipped with state-of-the-art facilities and up-to-date trainings of officers in line with
Posted by ABEE at 11:01 AM