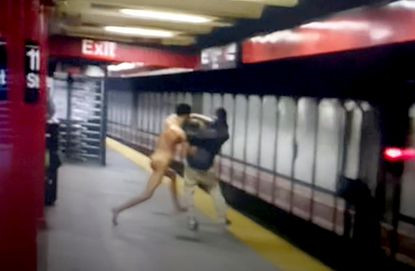 A naked man was electrocuted on subway tracks in Harlem after he pushed another man onto the tracks and fought with a third man who tried to help, police said.

It had to take the action of a good Samaritan to displace the naked man.

Around 4 p.m. the man completely unclothed despite the cold in New York right now, appeared on the platform of the Central Park North/110th St. station and began gyrating and dancing next to random people. Eyewitnesses say he seemed mentally chllenged.

“He came up to dance on me, but I told him to get lost,” said a witness to NY Daily News, who said he had seen the naked man at the station before and believed him to be homeless.

Then the naked man found another person on the station and began dancing next to him.

“That man felt disrespected, so he squared up like he was going to fight the naked man,” said the witness.

“When he [the naked man] saw he wanted to fight, he started hitting him like crazy.”

As the mental man was beating him, a train approached the station.

“The man just lost his balance and the naked man was able to push him into the train,” said the witness. “He fell in a way that knocked him temporarily unconscious."

Thankfully, the train stopped in the nick of time. 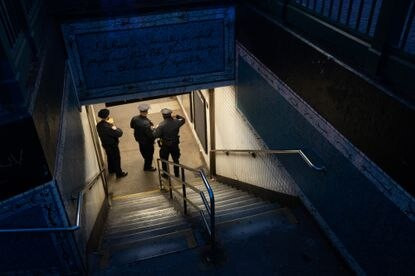 The naked man scuffled with the good Samaritan straphanger, said the witness.

The good Samaritan, angry at having his rescue efforts interrupted, “just whacked the hell” out of the nude man, said the witness.

“It was a heavy punch,” the witness said. “That’s when the naked man fell.”

The naked man hit his shoulder against the third rail, said a second witness. The third rail carries 625 volts of electricity — more than enough to instantly kill anyone. He died instantly

“I don’t even want to think about it,” said the first witness. “He didn’t die with any pain though. He died immediately. The shock was just too much.”

Police confirmed the incident, and said no body will be charged.

Watch the video below...