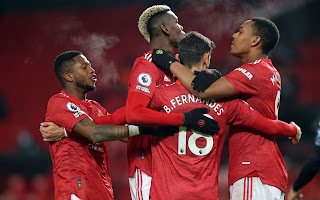 Manchester United climbed to the summit of the premier league table, level on points with defending champions, Liverpool on New Year's Day, Friday night, with a narrow 2-1 win over Aston Villa.

Bertrand Traore’s third goal in four games levelled matters in the 58th minute but Bruno Fernandes’ penalty moments later, after Douglas Luiz was adjudged to have brought down Paul Pogba, proved the difference and settled an evenly-matched, thoroughly hectic, end to end encounter. It was the hosts who started on the front foot, Emi Martinez denying Fernandes early on before producing a super save to push away Martial’s 10th-minute strike from the edge of the penalty area.

John McGinn tested David De Gea at the other end as Villa grew into the encounter and took the game to United, who remained dangerous in attack during an evenly-balanced and entertaining first half.

But the home side opened the scoring five minutes before the interval as Martial stooped to head home Aaron Wan-Bissaka’s cross from close range.

Villa started the second period positively and Matty Cash sent an effort narrowly over the crossbar before Ollie Watkins was denied by De Gea and Anwar El Ghazi fired off target. Martinez saved well from Marcus Rashford following his  run in the 56th minute and it proved crucial as the Villans levelled almost immediately.

McGinn took a quick free-kick and found Jack Grealish in space down the left channel and he surged into the box before crossing for Traore to fire home from six yards.

However, the level scores lasted just three minutes as Luiz brought down Pogba in the area and Fernandes converted the resulting spot-kick. Martial and Pogba went close for the home side while El Ghazi and Watkins threatened for Villa as both sides continued to go close at either end, Martinez pushing Fernandes’ long-range strike on to the crossbar in the 77th minute.

Dean Smith’s side applied pressure for a late leveller, Cash’s effort from distance was saved by De Gea, while Bailly blocked a last second shot as United stood firm for all three points.

The defeat extends Villa’s winless record against United to 16 matches since 2009, with just one triumph in their last 44 league meetings.