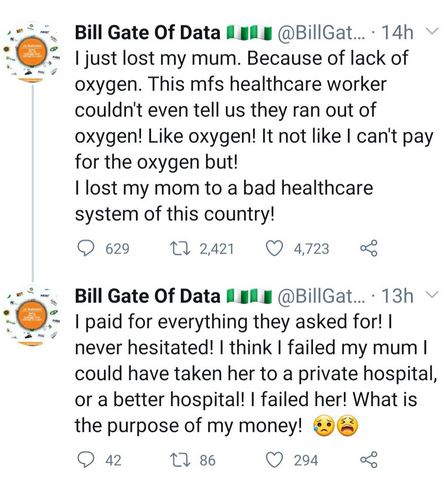 A heartbroken man took to social media to cry out after his mother lost her life due to lack of oxygen in a hospital in Nigeria.

Reports of deaths related to medical negligence is on the high in Nigeria, though those involved rarely push for a lawsuit.

Taking to his Twitter page, @BillGateOfData, wrote about the death of his mother, as he revealed the healthcare workers failed to tell them she ran out of oxygen, something he could have paid for.

See what he wrote below;

“I just lost my mum. Because of lack of oxygen. This mfs healthcare worker couldn’t even tell us they ran out of oxygen! Like oxygen! It not like I can’t pay for the oxygen but! I lost my mom to a bad healthcare system of this country!”

He added: “I paid for everything they asked for! I never hesitated! I think I failed my mum I could have taken her to a private hospital, or a better hospital! I failed her! What is the purpose of my money!”