The incident happened in Benin city, the Edo state capital, early Wednesday but the identity of the lady could not be established. 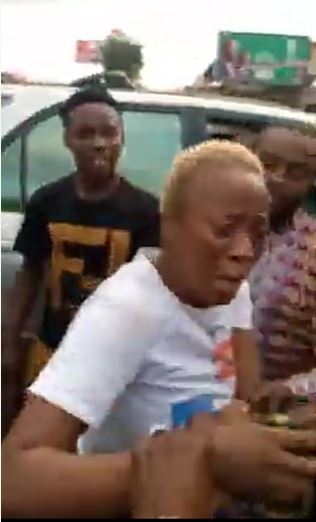 The lady was beaten up

A video has emerged showing the moment a young lady was beaten up after she was caught purchasing items worth three thousand naira (N3,000) with a fake bank alert.

According to Igbere TV, the incident happened in Benin city, the Edo state capital, early Wednesday. The identity of the lady could not be established.

It was gathered that the lady went into a store and purchased an item. When asked to pay, she requested to use bank transfer. She was given the account details and after some minutes, she presented a message on her phone telling the shop owner that she had been debited.

However, luck ran out of her when the shop owner checked his balance, and discovered that the money did not reflect in his account despite the alert. There was a brief argument between the customer and the seller, with the lady insisting on leaving the shop with the items. She told the seller that the delay in the transaction was from his end, as she had received her own alert.

When some onlookers approached the duo, it was discovered that it was same girl who had been caught in the act of paying items with fake bank alert twice before that day but pleaded for her dear life and was pardoned. This forced the onlookers to pounce on the lady who admitted carrying out a fake transfer for the shop owner.

A friend of the lady who spoke to Igbere TV, but pleaded anonymity, said the suspect was a specialist in generating fake alerts for sundry purposes, including payment for expensive items such as phones.

He said the lady, a former student of the Benson Idahosa University, in Edo, started misbehaving after she was introduced into 'crap' smoking by her boyfriend who is now late. The friend said she has a kid for the boyfriend who was shot dead when he went on robbery.