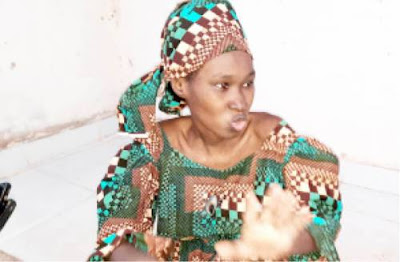 The Nigerian Security and Civil Defense Corps (NSCDC) in Gombe State over the weekend rescued a 35-year-old woman allegedly kept in captivity by her relatives at a family house for over five months.

Saratu Ayuba of Bolari quarters in Gombe metropolis was rescued following a tip-off by neighbours after they learnt of the inhuman condition she was subjected to.

She was locked up in a bedroom by her elder brothers for over five months after she was alleged to have conceived and delivered a baby girl outside wedlock.

Witnesses said Saratu was chained and locked up alongside her two-month-old daughter inside an unhygienic, single room at their family house at Bolari quarters in the metropolis.

Saratu, who appeared visibly emaciated without proper clothing, said she was only fed with tea and bread once a day for the last five months she had been locked up in the room.

Due to her unhealthy condition, she couldn't produce enough breast milk to feed her daughter, she said.

She said she has two other children, Alkasim, ten and Fatima, 8, from her first marriage.

However, Saratu's elder brother, Muhammad Tajudden, told reporters that they locked her in the room after she was diagnosed with a mental illness.