"We're Scared"—Graduates Deployed To Zamfara, Sokoto, Others For NYSC Cry Out As Insecurity Worsens

While some of the graduates requested a deferment of service, others said they would apply for redeployment to other states. 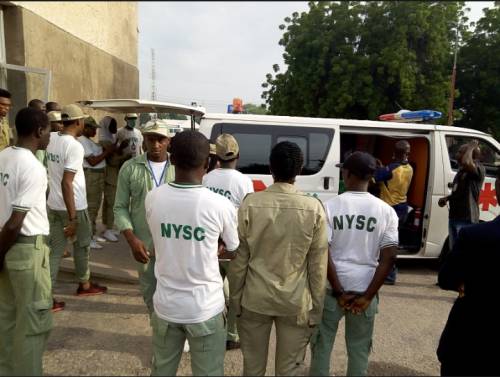 It has been revealed that some prospective members of the National Youth Service Corps (NYSC) have expressed fear and worries about where they are being posted to.

The gradates expressed fear after they were deployed to serve in Zamfara, Katsina, Borno and other states where insecurity has worsened recently.

In separate interviews with SaharaReporters, they said that they would not risk their lives travelling to those volatile states as tales of banditry, kidnapping and terrorism have become a regular occurrence.

While some of the graduates requested a deferment of service, others said they would apply for redeployment to other states.

Moyosore Adeleke, one of the prospective corps members who spoke with SaharaReporters, said she was sad to learn she was deployed to serve in Kano State.

Adeleke said, "I will pray before travelling to the camp. I will only be there for three weeks because I'm redeploying (to another state)  after completing the orientation camp. I don't want to be too far from my family, and the insecurity in the North gives me concern. I don't want to stay there; it's too risky to be there."

Victoria Amadi, from Enugu State, said she was devastated when she learnt NYSC had deployed her to  Sokoto State. Sokoto, a once peaceful state, has become a hotbed of banditry and kidnapping.

Sultan of Sokoto and President General of the Jamaatu Nasril Islam, Alhaji Sa’ad Abubakar lll, recently expressed concerns over insecurity in the northern region as bandits now go into houses to kidnap people in broad daylight.

In an interview with SaharaReporters, Amadi said, "I was devastated. I never wanted to go there (Sokoto). If there's any reason I want to go there, it would be for tourism purposes but I had never thought of spending a whole year there. l am scared of the road leading there," she said.

Jemimah Nweke, a graduate of the University of Nigeria, Nsukka has a similar concern. Nweke told SaharaReporters she was shocked that she was deployed to serve in Borno State, one of the most affected by the Boko Haram insurgency.

She said, "I was heartbroken. Of all places, Borno! I didn't accept it well. It took me a lot of time and days to come to terms with the fact that this is a reality. I would sleep and wake up hoping that it is just a dream, partly because I was expecting somewhere in the Southwest. I thought I had a good chance.

"My relatives kept hammering the fact that the place is unsafe, especially for someone who doesn't understand the language and who is a Christian."

Jemimah says accepting the offer will put her in harm's way. "I have not decided whether to embark on the trip or not," she says.

Like the prospective corps members, parents and friends of those mobilised to the northern part of the country have also expressed concerns over the safety of their children and wards.

Bisiriyu Adeyemi, a worried father, said his daughter had been deployed to Katsina State for NYSC but that he would not allow her to go due to insecurity in the North.

"I am broken because of the insensitivity of the board of NYSC. It seems they are unaware of the present state of insurgency and banditry of unequal proportion in Katsina and other hotbed states up North. I am very sure that their children will never be posted there," he said.

Saint Tempestina, a distraught sister, said her sibling was recently deployed to Katsina, adding that she is terrified of the insecurities in the North.

"Now I don't even know how she's supposed to go through these roads that are mostly passages to doom, where everything hangs in the balance."

"Northern leaders fail their people by downplaying education and promoting extremism. Now, everyone else suffers for it," Tempestina says.

Efforts made by SaharaReporters to interview the Director, Press & Public Relations, NYSC, Adenike Adeyemi, proved abortive as the phone only rang out. She has yet to respond to a message sent to her mobile.