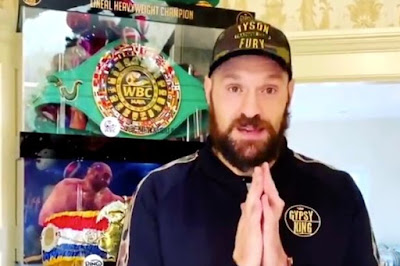 Tyson Fury has asked the BBC to remove him from the shortlist for the Sports Personality of the Year award.

Fury is one of six athletes in the running for the award with the winner announced on December 20.

But Fury, who is 10/1 win to win, claims he has no need for awards and would rather have the adulation of his fans.

"This is a message for the BBC and the SPOTY award," he said in a video posted online.

"Please take me off your list, I am the people's champion and have no need for verification or any awards.

"I know who I am and what I've done in sports, the love of the people is worth more to me than any award in the world.

"To all my supporters, please don't vote for me in this and take me off the list."

The BBC rejected Fury's claim and said: "The shortlist is decided by an independent expert panel who choose contenders based on their sporting achievement ... on this basis Tyson Fury will remain on the list for SPOTY 2020."

Fury was included on the shortlist for his stunning seventh-round stoppage of Deontay Wilder in February.

He became world heavyweight champion for the second time and is now set to face Anthony Joshua in a unification clash next year.