The Significance Of January 14: The Alaafin And Oyo History | Eric Teniola 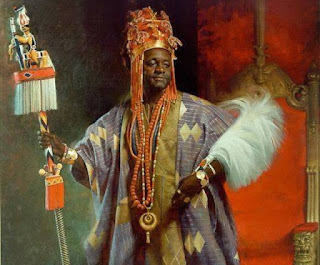 The drums will roll out on Thursday January 14 on the golden anniversary of the coronation of the Alaafin of Oyo, Iku Baba Yeye, Igba Keji Orisa, Oba Lamidi Olayiwola Adeyemi III (82). I am sure the Iya Ilu, the traditional drum, and the Shekere will be sounded on that day. If his empire has not disintegrated, there will be celebrations on January 14 in Awe, Moniya, Igboho, Iponri, Fiditi, Ayete, Ado Awoye…

Mention must be made of Oba Adedokun Omoniyi Abolarin, the Orangun of Oke Ila, who personally built a college for his community in Oke Ila, in Ifedayo Local Government Area of Osun State. He was born on September 4, 1958 and was crowned in October 2006. I cannot forget Oba Femi Ogunleye, the Towulade of Akinale, near Abeokuta, a journalist/legal practitioner, who personally built a school in his community too.The Alaafin has now joined the league of traditional rulers who have reigned for more than fifty years or for nearly fifty years. Notable among them is Oba Sikiru Kayode Adetona, the Awuyale of Ijebuland, who was born on May 10, 1934. He was crowned on Saturday, April 2, 1960. He became a member of the Western Region House of Chiefs on April 5, 1960. A friend of mine, Dr. Fasi Yusuf, has written so much about the Awujale. He is a living legend. I saw his son, Prince Adedire at FESTAC in Lagos recently, when my friend, Otunba Gbenga Tiamiyu from Iperu, turned seventy. Oba Rufus Adekolurejo Aderele was the Osemawe of Ondo from 1942 to 1974. He was Osemawe for 32 years.Oba Daniel Akomolafe Anirare Aladesanmi ruled from 1937 to 1983 as the Ewi of Ado Ekiti. His reign was the longest in the town in modern times. Till today, he is still loved in Ado ekiti.The Akarigbo of Remo, Oba Moses Sowemimo Awolesi, Erinwole II, reigned from 1952 to 1988.The late Attah of Igala in Kogi State, His Royal Majesty Aliyu Ocheju Obaje (1920-2012) ruled for 56 years.

Oba Adetula Oyinyo Adeleye (1928-2012; CFR), the Elekole of Egbe Oba, was crowned on June 2, 1953 and he died on the throne on October 2, 2010. He was father in-law to Senators Ayo Arise and Dayo Adeyeye, the minister of state for Works under President Goodluck Jonathan (GCFR).The Akarigbo of Remo, Oba William Christopher Adedoyin, reigned in Shagamu between 1916 and 1952.Alhaji Ado Bayero was the Emir of Kano from 1963 to 2014. He was born on July 25, 1930 into the royal family of the Fulani Sullubawa clan that has ruled over the Emirate of Kano since 1819. His father was Abdullahi Bayero and mother, Hajiya Hasiya. He was the eleventh child of his father and the second of his mother. At the age of seven, Alhaji Ado Bayero was sent to live with Maikano Zagi. His father reigned for 27 years. Muhammadu Sanusi I, who was Ado Bayero’s half brother, ruled after their father from 1953 to 1963. Following his dethronement in 1963, Muhammadu Inuwa ascended the throne for three months.

Oba Sir Titus Martins Adesoji Tadeniawo Aderemi, Atobatele I, (November 15, 1889 – July 3, 1980) was the Ooni of Ife from 1930 until 1980. He served as the governor of Western Region, Nigeria, between 1960 and 1962. Sir Adesoji Aderemi was known as a wealthy man, who had a large family comprising many wives and children.

If we are to combine his years in exile and his two periods on the throne, the late of Olowo of Owo, Sir Olateru Olagbegi II (August 1910-1998), would have ruled for fifty-seven years in all. He was appointed the Olowo in 1941 and ruled for twenty five years before he was deposed in 1966. In 1993, his throne was restored to him, and he reigned till he died in 1998. Some of his children, Wale, Gbenle and Suyi, are my personal friends. In the 1960s, he was the most powerful ruler in the Owo division of the Ondo Province, which now constitutes six local governments in Ondo State – four Akoko local governments, Owo local government and Ose local government.The Olukare of Ikare, Oba Akadiri Saliu Momoh has been on the throne since 1984. Similarly, the Owa Ale, also of Ikare, Samuel Lolapo Adedoyin, who died recently, was on the throne for 48 years. The Alake of Egbaland, Oba Samuel Mofolounsho Lipede, reigned from 1972 to 2005.The late Olu of Warri, D. Eyeolusan Joao Akengbuwa ruled from 1795 to 1848. He was the longest reigning monarch in Itsekiri land, followed by Erejuwa II, Wilson Ayoronmitsi Gbesimi Emiko, who ruled from 1951 to 1986, and also followed by Olu Atuwatse II, Godwin Toritseju Emiko, who ruled from May 2, 1987 to September 5, 2015.Oba Sir Titus Martins Adesoji Tadeniawo Aderemi, Atobatele I, (November 15, 1889 – July 3, 1980) was the Ooni of Ife from 1930 until 1980. He served as the governor of Western Region, Nigeria, between 1960 and 1962. Sir Adesoji Aderemi was known as a wealthy man, who had a large family comprising many wives and children.The first Otaru of Auchi in Edo State, Ikelebe the first, ruled from 1819 to 1861. Auchi is the second largest city in Edo State, after Benin. It is the headquarters of Etsako West Local Government. During the British colonial rule, it was the headquarters of the Kukuruku Division, the administrative headquarters of five districts. Auchi is also the roots of the Momoh family. It is the home of Auchi Polytechnic.

Mention must be made of Olubadan of Ibadan, Oba Isaac Akinyele (1880-1965), who was the first Christian to be Olubadan. He reigned for only ten years but laid a formidable reputation when he died in May 1965.Sir Siddiq Abubakar III (1903-1988) was the traditional ruler (Sultan) of Sokoto. He was born in Dange, some 60 kilometres from Sokoto, on March 15, 1903, the same day the British finally subdued the Sokoto Caliphate. Siddiq Abubakar III was the son of Usman Shehu, an eminent personality whose father, Mu’azu, was the Sultan of Sokoto (1877-1881) and a direct descendant of Usman Dan Fodio who founded the Caliphate in 1809. Siddiq Abubakar III had an Islamic education; he attended the local Koranic schools and held several administrative posts before succeeding his uncle, Hassan Ibn Mu’azu, as the Sultan of Sokoto at the age of 35. He first came to Sultan Hassan’s attention when he was a district scribe, and in 1931 he was appointed a local authority councilor of the Sokoto Native Administration. Later, as head of Talata Mafara, a most important district which included the commercial town of Gusau, he distinguished himself by his administrative competence and the able way he dealt with appeals from traditional courts and supervised districts and village heads. In recognition of his ability and usefulness to the emirates, he was the Sultan of Sokoto between 1938 and November 1988. He was succeeded by Sultan Ibrahim Dasuki, who reigned from 1988 till 1996. The present Sultan Saadu Mohammed Abubakar is the son of Sir Siddiq Abubakar.His Highness Alhaji Umaru Sanda Ndayanko (1937-2002), the late Etsu Nupe, was a permanent secretary in Kaduna in 1964. He ascended the throne in 1975 and was nominated as a member of the Constituent Assembly in 1976. When he died in 2003, his people mourned his passage, for the development he brought to his kingdom.The late Jaja Amanyanbo of Opobo, Chief Douglas Jaja (1915-1980), son of Chief Arthur Mac Pepple Jaja (1872-1936), ruled for 60 years, although he renounced his chieftaincy temporarily between 1943 and 1951, to get involved in politics. At the time of his death in 1980, he was much loved by his people.The late of Oba of Benin, Oba Uku Akpolokpolo Akenzua II (1899-1978), son of Oba Eweka II, and born as Edokparhogbuyunmun, ruled for 44 years following the death of his father in 1934. In 1925, he served under the supervision of the late Alake of Egbaland, Oba Ademola, in his palace in Abeokuta.Sir Oladipo Samuel Ademola (1872-1962) was crowned the Alake of Egbaland on September 27, 1920, to succeed Oba Gbadebo, who died on May 28, 1920. At the crowning ceremony, over 70,000 people were present, including a representative of the Queen of England. He ruled for 22 years. One of his sons, Justice Adetokunbo Ademola, eventually became the first Chief Justice of Nigeria.

The Oyo Empire is still very important to the Yorubas till today. It reminds them of when they were masters of their destiny under one rulership. The Empire stretched from the present Kwara State to Western Nigeria, up to Dahomey, which we now refer to as the Republic of Benin. By the middle of the 19th Century, that empire had disintegrated and from its ruins rose the successor states of Ibadan, Abeokuta, Ijaye, Ogbomoso…

Eric Teniola, a former director in the Presidency, writes from Lagos.