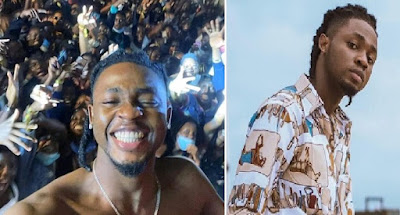 Fast-rising Nigerian artiste, Omah Lay has been arrested by officers of the Uganda police force in Kampala, Uganda for reportedly flouting covid-19 guidelines.

The singer whose real name is Stanley Omah Didia was arrested after his performance last night at The Big Brunch, which held at Speke Resort, Wavamunno Rd, Kampala, Uganda. His arrest was confirmed by Luk Owoyesigyire, Assistant Superintendent of Police and Deputy Police Spokesperson, Kampala Metropolitan Police.

Owoyesigyire also confirmed that Dungu Ivan, the manager of the venue where Omah Lay performed and Prim Kasana, the event manager were arrested alongside the artiste.

According to the Ugandan news outlet, The Independent, the organizers of the event disguised the show as a lunch and dinner event but later on, at night started inviting artists to perform.

The Independent added that Omah Lay and the others are currently being held at Katwe police station and are being charged with doing “acts that are likely to cause the spread of infectious disease Covid-19.”

The Ugandan president Yoweri Kaguta Museveni, at the onset of the COVID-19 pandemic, suspended music concerts and that directive still stands.